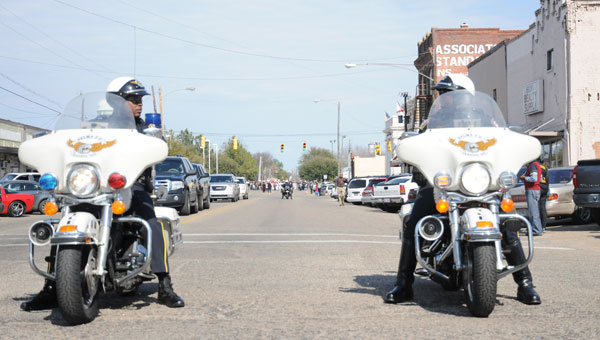 The Bridge Crossing Jubilee is heralded as Selma’s largest annual event and it may also have the largest effect on the city’s budget.

One of the most visible signs of city participation in the Jubilee was fire and police officers on the streets. Leading up to the event, the fire and police departments began developing safety plans. On Sunday, both departments worked in collaboration to provide security.

Dozens of officers worked during Jubilee weekend. In addition to normal salaries, the department regularly is forced to drain its overtime budget following Jubilee to continually provide security.

All uniformed officers in the Selma Police Department worked during the Bridge Crossing Jubilee weekend, according to Chief of Police William Riley. An additional 35 people — administrative staff, crossing guards and civilians — helped the police department.

Though it comes at a significant cost, Riley said security services provided during jubilee are necessary.

“We recognize that we have to do it because of the nature of the event,” Riley said. “But it comes out of my yearly budget. It has an effect, especially when we get close to the end of the year.”

“Every penny is something to be concerned about,” Stokes said. “Nothing is free. There is always someone paying for something.”

With his department spending approximately $15,000 in overtime salaries, Stokes said previous estimates of a $40,000 cost to city government is relatively low.

City government doesn’t seek to recoup expenses from in-kind services by billing the National Voting Rights Museum and Institute, which runs the event, according to Mayor George Evans.

“It basically has to be absorbed by each department,” he said.

In the weeks leading up to the jubilee, Evans asked the city council to charge the museum for use of several city buildings, but the council moved to provide the buildings at no cost.

“The biggest strain comes on our budget,” Evans said.

“I think time will tell how we did in terms of sales tax revenue,” he said. “If you look at revenue from previous years, it doesn’t reflect a plus side. We are hoping that, with the switch to the [Alabama] Department of Revenue, we picked up on an additional amount.”

The city switched from Revenue Discovery Systems to the Alabama Department of Revenue late last year after sales tax returns steadily declined each month. At the time, city council members said the switch was to ensure tax revenue was being properly collected. Only a few months in, returns have picked up slightly.