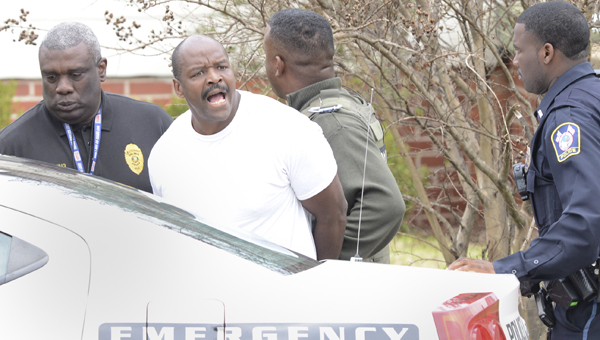 Jimmy Brown is lead to the back seat of a police cruiser following a police chase Thursday morning in Selma. (Jay Sowers | Times-Journal)

A high-speed police chase that began on Medical Center Parkway ended in Old Town when a stolen vehicle slammed into a tree near the intersection of Dallas Avenue and Mabry Street.

Dozens of police surrounded the house and blocked access to a half-block radius of Dallas Avenue.

Brown, 44, voluntarily surrendered after a K-9 unit arrived on scene and police warned him twice.

Brown was charged with first-degree theft, two counts of attempting to elude officers, first-degree criminal mischief and second-degree assault. Brown was booked into the Dallas County Jail Wednesday afternoon under no bond. A bond hearing is scheduled for Thursday at 9 a.m.

Brown was on probation for a prior felony charge at the time of the arrest. Lt. Curtis Muhannad said more charges may be forthcoming.

Donja Smith, who works on Medical Center Parkway, said the chase began when Brown walked behind her business and stole a coworker’s red, GMC truck.

“I got out and trailed him,” she said. “As I was driving, I was on the phone with 911, letting the police know which way he was headed. We ended up over by Selma Avenue, behind the graveyard, and he hit one of the police cars so hard it broke the axel on the car.”

Muhannad said a separate police car was forced from the road to avoid being struck by the stolen truck. Brown allegedly continued the chase and slid into a tree behind the 709 Dallas Ave. house.

Police officers entered the house with a key provided by one of its residents, Muhannad said.