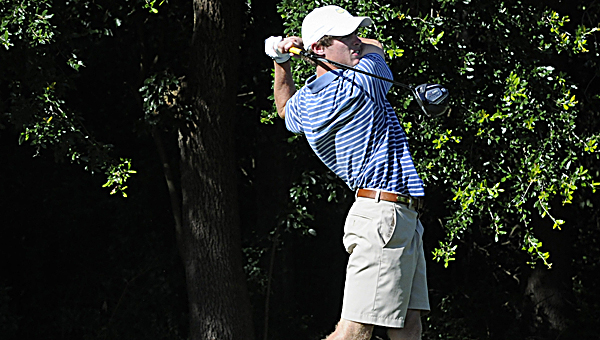 The Morgan Academy golf team is off to a hot start after top five finishes in tournaments in Troy and in Montgomery to begin the season.

Due to their high finishes and having their top four finishes all shoot a combined score of 360 or lower, the Senators have already qualified for the state tournament that will take place at Saugahatchee Country Club in Opelika.

“We have been pleased,” Morgan Academy golf head coach Ira Wagoner said. “We qualified for the state tournament the first tournament of the year in Troy as a team and we weren’t able to do that all of last year, so we think we’re in good shape.”

The Senators play in Wilcox Thursday at Roland Cooper State Park in their third tournament of the season.

The team is led by seniors Ford Manderson and Dalton Lee, who consistently post the lowest scores for the team.

“Dalton and Ford are probably in the top 15 golfers in the AISA right now,” Wagoner said. “Those two guys, we just need some of our seniors to play a little bit better. With the cold weather and three of my guys played basketball, so we are just now getting to where we can practice more.”

Wagoner said it will be a challenge for his team to win a AISA team championship this year, because the Senators have not shown enough consistency. Wagoner said Manderson is among the favorites to win an individual championship.

On the other hand, Wagoner thinks Lee could be a big surprise.

[Lee] has the demeanor of a golfer,” Wagoner said. “He doesn’t have a lot of highs and lows but he’s a very good athlete and he might surprise some people before the end of the year.”

Outside of the Senators’ six seniors, the team also features a ninth grader and a fifth grader. Wagoner said he’s excited about the future of golf at Morgan.

“We have some very young golfers at Morgan that are very good golfers,” Wagoner said. “Next year we may be playing with some junior high students and some more elementary students.”

After playing at Wilcox Academy Thursday, the Senators will play at Saugahatchee Country Club Tuesday, March 18, which is the site of the 2014 AISA state tournament April 28-29. Wagoner said it will benefit the Senators to see the course this early, especially since Morgan will also play a practice round the week before the event.

“For those that haven’t played there, it will help,” Wagoner said. “In the last couple of years they have changed the golf course so for those kids that have seen it before it is going to be a little bit of a different course.”

After a week off during spring break, the Senators play at Indian Hills against Tuscaloosa March 31 before facing off at Fort Dale April 8. The Senators host a tournament April 10 at the Selma Country Club.

Dallas County pitcher Tori Hatfield winds up for a pitch in the Hornets’ 16-1 victory over Selma Tuesday night at... read more