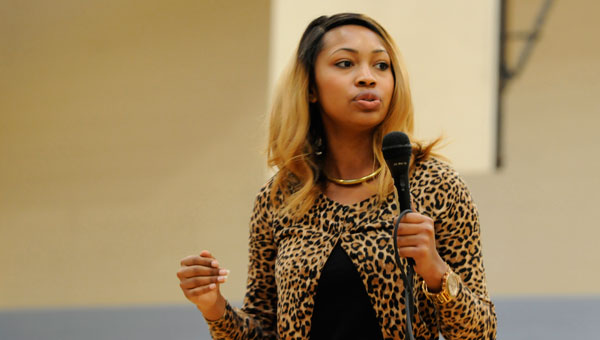 Selma native Coleysia Chestnut, who is featured on MTV’s new dating reality show “Are you the One?”, has an open discussion with members of the new Hudson Girls Rock mentoring program Thursday held at R.B. Hudson Middle School. (Sarah Robinson | Times-Journal)

A MTV reality star from Selma spoke at her former middle school Thursday to encourage the youth.

When Coleysia Chestnut visited R.B. Hudson Middle School Thursday to speak at the kickoff ceremony for the Hudson Girls Rock mentoring program, she covered various topics from boys, to self-respect, to education.

The eighth grade girls who are involved in the program had an opportunity to ask Chestnut, who was featured on MTV’s “Are you the One?” dating show, a variety of questions.

“I know how I was when I sat in these seats,” Chestnut said. “I went through self-esteem issues. I went through insecurities, and I want to help these girls and coach them.”

The Hudson Girls Rock program is meant to encourage young women to be the best they can be in every aspect of their life. Tammy Major, the administrative assistant for curriculum and instruction at R.B. Hudson, leads the program and feels it’s necessary for the children to be successful.

Major said she noticed poor grades, worrisome behaviors, and other concerns that pushed her decision to create the program. She said the program would give them the proper support to help them do better.

Chestnut told the girls to never be afraid to show their true self, get their education, start developing a 5-year life plan, keep their focus on school and to revisit Selma to give back to their community.

Chestnut related to the girls by sharing of her personal stories about her experience at R.B. Hudson Middle School.

“We are hoping to impact, not just R.B. Hudson and Selma High, but also the community because we desperately need it,” Major said.

The state is offering free voters ID months after the state’s decision to add new requirements to vote. According to... read more