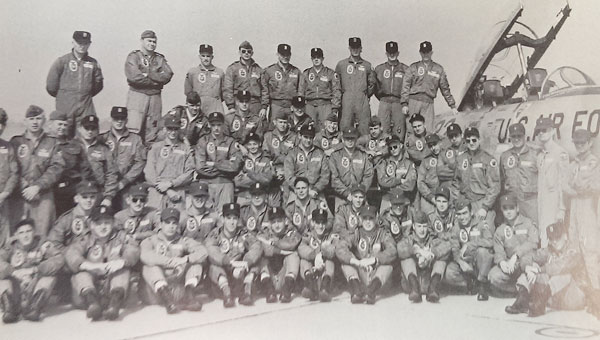 Craig Field’s American Flag flew a bit lower than usual this weekend in remembrance of a group of pilots that lived on the base 50 years ago.

The official reporting date for pilots the 65 F class of the 3615 Pilot Training Wing was March 9, 50 years ago. Craig Field director Menzo Driskell lowered the large American Flag to half-staff for several days in commemoration of the reporting date.

Though Craig Field still contains an airstrip, its flight operations were much larger in 1964. At the time, it functioned as a sort of basic training for pilots. Jack King, a member of the 65 F class, said he received general pilot training at Craig Air Force Base before traveling to California for B-52 Bomber training.

“At the time Craig was a beehive of activity,” King said. “There were people everywhere. People were so nice in Selma — when you came into town you felt like part of the community.”

The 65 F class started with a total of 43 students — 35 training to enter the U.S. Air Force and five foreign students from Guatemala, Venezuela and Pakistan.

The training schedule required pilots to wake at sunrise and either fly or attend classroom training. King said his schedule alternated — one morning he attended flight training in a classroom and the next he was thousand of feet above Dallas County in a jet.

“When I first got to Craig, I had never actually flown, but I had been in planes as a passenger,” King said. “The training was 55 weeks from entry to graduation. If the weather was good, we were all up in the air and if the weather was bad, we might all be in the classroom.”

He was only in the U.S. Air Force for a short time, and says his interest in flying began in college, on a whim.

“My friend, brother and I said we will go take the test and see how we do,” King said. “I really didn’t have a big interest in flying throughout college.”

Some members of 65 F have died, but in 2010 a few remaining members gathered at Craig for a reunion.

“As we rode around the streets, memories flocked back,” We stood on some of the concrete slabs in the exact spot where we lived.”

Driskell said the flag, flown at half-staff, would be given to remaining members of the 65 F class.