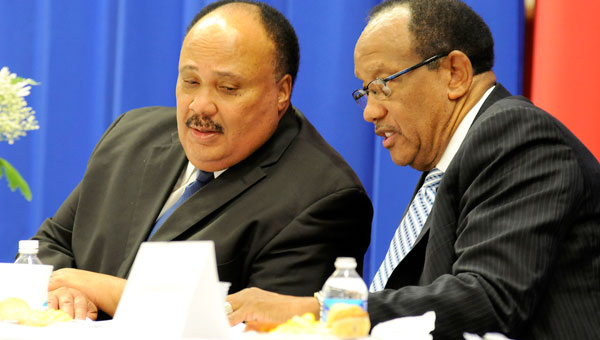 Among the hundreds who gathered Sunday at the King Unity Breakfast held at Wallace Community College-Selma were several famous civil rights activist.

Rev. Jesse Jackson, the founder and president of the Rainbow People United to Save Humanity Coalition, Dr. William Barber, a National Association for the Advancement of Colored People board member, and Academy Award Winning actor Louis Gossett Jr., the founder of the Eracism Foundation were among the list of well-known individuals that attended the Bridge Crossing Jubilee event, along with local elected officials.

Selma Mayor George Evans was among the speakers who talked about the importance of remembering those who sacrificed for equality in the African-American community.

“As the first black city council president who was a direct result of the events we commemorate today, I am grateful for the sacrifice and those that made it possible,” Evans said. “I am humbled.”

While the Voting Rights Act was approved less than six months following the horrible events of March 7, 1965 — known as Bloody Sunday — the U.S. Supreme Court nullified the preclearance provisions of Section 5 in June 2013. Several speakers discussed the need to combat the changes with another trip to Washington in the near future.

Jackson said the roots of the fight for equality may be in the past, but there are new challenges continually arising in the present day.

“My fear is we may get what we want, but not what we need,” Jackson said. “That’s why we challenge incomplete legislation.”

Martin Luther King, III, the oldest son of civil rights leader Dr. Martin Luther King Jr., spoke about the need for another movement that would secure the natural born rights of African-Americans.