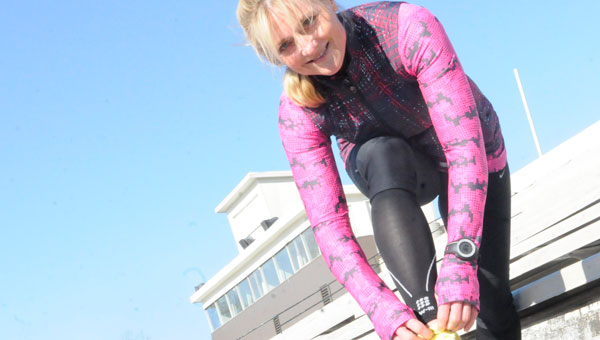 Anyone driving down Dallas Avenue or walking around Bloch Park in the wee hours of the morning may have bumped into Selma’s Janie Mothershed, or at least seen her zip past during one of her marathon training runs.

Mothershed, 51, will participate in the 118th running of the Boston Marathon on April 21 and she’s working hard to prepare for one of the world’s biggest races.

“I had several people encourage me, telling me it was the race of a lifetime,” Mothershed said. “Everybody wants to run the Boston so I said I want to do it if I can train and do it without it being so hard.”

The members of her running group primarily run shorter races and a lot of half-marathons, but they chose to try the 2013 Mercedes Marathon.

“I was just going to run one just to say I had run one,” Mothershed said.

By the end of the race, Mothershed was worn out and exhausted to the point where she didn’t plan on participating in another marathon ever again.

“After I ran the Mercedes, it was so hard, but we had trained in the matter of three months basically to run 26 miles,” Mothershed said.

However, after the race, she found out that her time was good enough to qualify for the Boston Marathon.

“It was my very first marathon and I qualified so that was very exciting because most people do not do that,” Mothershed said.

After learning she had qualified, Mothershed knew she had to decide if she wanted to run the Boston. She wondered if she would even make the final field, especially after the bombing at the 2013 Boston Marathon, which made a lot of runners that would typically skip the race want to take part.

“I was worried that I wouldn’t get in because I figured everybody in the world would want to run that special race this year,” Mothershed said.

In late August 2013, the Boston Athletic Association announced the 2014 field would be increased by 9,000 runners — allowing 36,000 entrants to take part. At that point, Mothershed knew she would make the race so she made a final decision to take part in the event.

She said the bombing at last year’s event never factored into her decision, although she said a lot of people mentioned it to her.

“When the bombing happened it didn’t really change my mind,” Mothershed said. “A lot of people were concerned that I wanted to do it. They were saying ‘You shouldn’t do it’ and that sort of thing but I never really had second thoughts about that part of it.”

Mothershed told running partner Bill Potter — who she gives a lot of credit for her running success — that she wanted to run the Boston, but she didn’t want it to be as hard as the Mercedes was.

From that point on, training started for the Boston Marathon.

“Over the last two years she has really progressed phenomenally,” Potter said of Mothershed. “She sets high standards for herself. She sets a goal and she works for it.”

Potter and Mothershed run together five or six times a week on average.

Although he says he isn’t officially her coach, Mothershed refers to him as one because of all the training help he has given her.

Potter ran the Boston Marathon in 1994 when it was a much smaller race.

“It is a fantastic experience to say that you’ve done it because you have to qualify to run Boston,” Potter said.

Mothershed and Potter planned out a schedule in advance to help her reach her goal of running the Boston without it being as hard as her first marathon.

“We put together a twelve month schedule,” Potter said.

“She did First Light in Mobile in January so we had a training program for that and then we had a short recovery period and then back to training for Boston.”

At the First Light Marathon in Mobile, Mothershed finished second in the “female grand masters” division.

After that race, she slowed her training down a touch to overcome the strain the marathon had taken on her body, but in March she has restarted strenuous workouts.

She is running 18 to 22 miles on a regular basis this month to get acclimated with the distance of a marathon again.

“When I started training this past fall to get back into the routine for January, the 18, 20 and 22 mile runs weren’t as difficult and I knew when I felt good after running 20 miles that I could do this,” Mothershed said.

While Dallas County High School has been celebrating its first basketball championship, the Hornets’ track and field team has been... read more