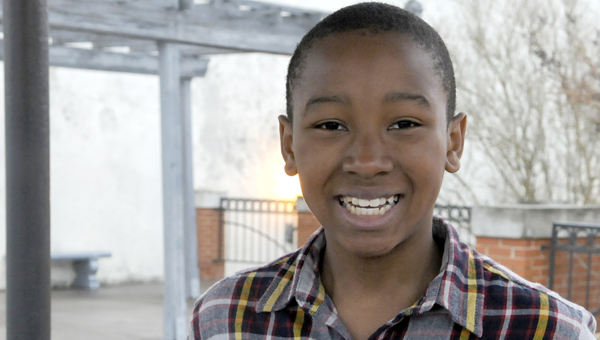 “Third time’s the charm” is a phrase eighth grade Valley Grande Elementary student DeAndre’ Baker can relate to after earning the title of Dallas County Spelling Bee winner as a third-year participant.

DeAndre’ was all smiles as he talked about his win in the Dallas County Spelling Bee, which he secured by correctly spelling the word “herbivore.” He smiles grew wider as he spoke about the trip Birmingham to compete in the Alabama State Championship at Oak Mountain High School.

“It feels great,” De’Andre said about his win in the county competition. “I’m very excited.”

De’Andre started studying for the Feb. 6 countywide competition when he received the words upon starting the second semester of school in early January. He said it’s his love for spelling and determination that motivated him to dedicate an hour a day to studying for the competition.

De’Andre said he draws his inspiration from “Akelia and the Bee” released in 2006 that features a young girl who overcame life challenges on her journey to the title of national spelling bee champion.

“It’s just my talent to spell words,” De’Andre said. “I’ve been watching ‘Akelia and the Bee’ and see how she’s been spelling it, so I hoped I could do it, too.”

If De’Andre is able to claim a victory at the state level, he will be awarded an all-expenses-paid trip for two to compete in the Scripps National Spelling Bee in Washington, D.C., along with other prizes.

For De’Andre, the excitement of the possibility of a trip Washington meant a chance to hear the spelling of even more new words.

De’Andre’s father, Felix Baker, also was quick to smile as he spoke about his son’s achievements.

The town of Orrville is one successful vote and one signature from Gov. Robert Bentley to having a “significant” amount... read more