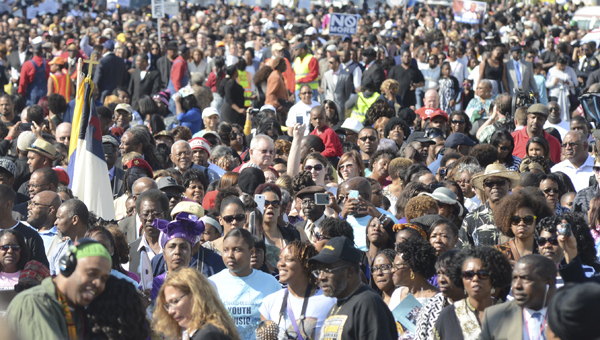 Thousands of people march down Broad Street toward the Edmund Pettus Bridge on Sunday during the annual Bridge Crossing Jubilee. (Jay Sowers | Times-Journal)

By Josh Bergeron and Jay Sowers

Thousands of tourists, Selma residents and elected officials packed downtown Sunday for the 49th anniversary of Bloody Sunday and the 2014 Bridge Crossing Jubilee.

While vendors prepared to open up shop on Water Avenue, Brown Chapel A.M.E. Church was filled to capacity, hosting a service that featured more than a dozen legislators and community leaders.

After formal greetings, scripture readings and a welcome from local dignitaries, the crowd erupted in cheers during a speech by Alabama State University President Gwendolyn Boyd. She focused on ongoing injustices with voting rights. 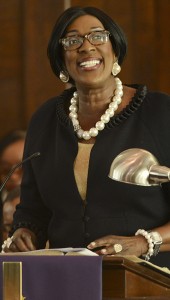 “Yes we have come a long way, but we have a long way to go,” Boyd said. “We challenge, confront, oppose and exposed the evils of Jim Crow in the 1960s and the tactics of James Crow esquire in 2014. We need not get amnesia today and we don’t have time to rest.”

As the church service neared completion, thousands of people gathered around Brown Chapel’s entrance for a pre-march rally. A renewed effort to guarantee voting rights was a common theme during the rally’s speeches.

With the church service over, a parade of thousands proceeded down Martin Luther King Street, turned right on Alabama Avenue before turning onto Broad Street, in direct view of the Edmund Pettus Bridge

A group from an independent African village in southern South Carolina, named Oyotunji, led the parade. The group’s leader Oba Adefunmi II said he enjoyed the trip to Selma — his first ever — but was more concerned with sharing new ideas.

“It’s not about beating the same old drum,” Adefunmi said. “Many times we think about money and politics, but it’s about the people. The people are what make everything happen.”

Other marchers also shared their reasoning for traveling to Selma.

“I wanted to bring him here to let him know the history of what happened on the Pettus Bridge and the power of bringing people together,” Townsend said, “I’ve really enjoyed seeing it all in person, and it’s given Taylor a good perspective of what is and what was.” 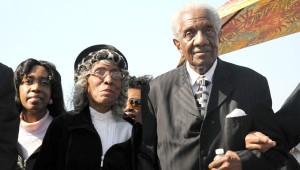 Blount, 21 on March 7, 1965, came to Selma with a busload of other Tuskegee College students to take part in the march. The bus never made it to Selma and was stopped by a line of police officers on the southern side of the Pettus Bridge.

“The police stopped us about a mile-a-half before the crossing the bridge, so we were sitting on the bus, waiting to see what was going to happen next,” Blount said. “We heard the gunfire, we could see the smoke and tear gas and horses running around and you knew it was not going to be a good day.”

Blount said he and his schoolmates watched for only a few moments before boarding their bus and returning to campus.

The march paused for a brief prayer at the northern foot of the bridge and again at the bridge’s peak for a second prayer. Marchers continued down the bridge’s southern slope, chanting and singing, before disbanding at the Voting Rights Museum.