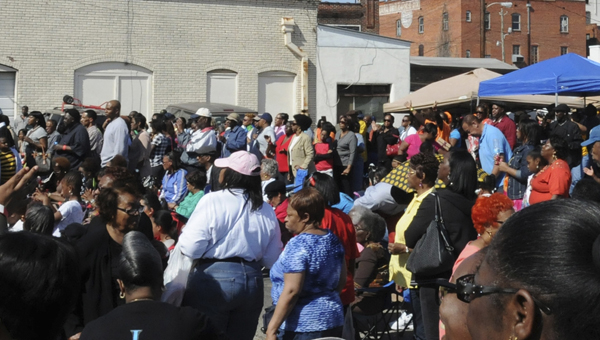 A huge crowd gathers at the end of Water Avenue in front of ArtsRevive Carneal Building to watch the gospel musical quartet Mighty Clouds of Joy perform at the Jubilee Festival event tied to the annual Bridge Crossing Jubilee. (Sarah Robinson | Times-Journal)

The streets of downtown Selma were crowded with visitors, vendors and entertainment Saturday as the annual Bridge Crossing Jubilee celebration continued.

The Jubilee, which is meant to commemorate the 49th anniversary of “Bloody Sunday,” has attracted visitors from all over. Saturday was buzzing events all across Selma, including the Jubilee Festival, the Battle of the Bands, Children’s Village, Film Festival, the Jubilee Parade and more.

“It wasn’t too long ago that we didn’t have a lot of the rights that we have now,” Mevis Roween, an Atlanta resident, who has returned to the Jubilee several times, said. “I think it’s important we put it in the forefront of our minds, so we don’t become complacent.”

Musical performances from rapper Yung Dro, R&B singer Jennifer Holiday, Gospel group Mighty Clouds and others performed on stages on the both sides of Water Avenue.

The excitement of the day was evident as people of all ages danced, laughed and played in the streets.

For 17-year-old Johnny Nual who attended the Jubilee for the first time, the celebration is a learning experience.

“I learned a lot of stuff I didn’t know, like how hard they fought for our freedom,” Nual said. “It’s the things they did for us.”

Among the thousands of people were vendors from near and far.

Hiecue Gladden, from Chicago, came to the Jubilee as a vendor ready to showcase his artwork. Gladden’s images put on display, were a reflection of the meaning behind the celebration.

“A lot of my images have to deal with civil rights and images of Blacks that have inspired me of the years,” Gladden said.

Classie Bolber, from Dothan, has attended every Jubilee ever since it began. As one of the marchers on March 7 1965, “Bloody Sunday,” she refuses to deny such a grand opportunity to honor that historical march.

“It was just so much fear everywhere, something like a nightmare,” Bolber said as she described her “Bloody Sunday” experience. “It’s such a good feeling to look at the law enforcement that was against us and beating us, now their protecting us.”

Bolber said she is thankful for how far the African-American community has come, but she knows there is room for improvement.

She said the Jubilee serves as a great way to make sure African-Americans continue to reach their full potential and take advantage of all the opportunities afforded to them.

“It’s just important that this part of history stays alive in our minds,” Bolber said.