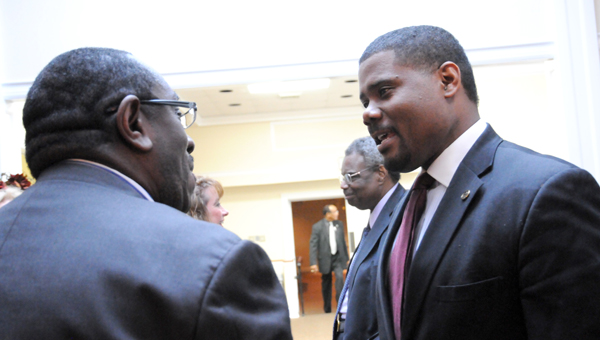 Selma Mayor George Evans opened the event by welcoming attendees to Selma and speaking about the historical context of Jubilee.

“The Jubilee is just a great opportunity to promote Selma and the history of Selma in terms of the things our city did to change the nation,” Evans said. “It gives tribute to those who gave up their life for something they believed in. We are excited to have so many people here in our great city and are looking forward to the events this weekend.”

Though, 2014 marks the 49th anniversary of Bloody Sunday, State Sen. Hank Sanders, D-Selma, said the celebration of the historic day began many years later, in 1975.

“At first it took place every five years, but eventually it became an annual thing,” Sanders said. “I greet you in the spirit of continued struggle because there is still work to be done. Many of us simply want to celebrate, but if we truly celebrate whats happening then we will be celebrating the loss of voting rights.”

Jackson was a deacon at a Baptist church in Marion in the 1960s. During protests in Marion, a state trooper allegedly shot at killed Jackson when he was 26. His death is said to have led civil rights leader James Bevel to organize the first march, known as Bloody Sunday.

“I realize I am here because of the great work of so many people in Marion and the city of Selma,” said State Rep. Darrio Melton, D-Selma. “Because of the efforts in the 1960s, I’m now able to serve in an elected office.”

The official start of turkey season isn’t until March 15, but local hunters are prepping guns and calls in anticipation... read more