Former water board chairman Lee Goodwin is taking a step back from his role as the head of Selma Water Works, but still has several goals that he feels are vital to improving Selma.

Goodwin officially stepped down from his chair position at the end of February for personal reasons, but still serves as a board member. He took the chairman position in 2008, meaning his tenure lasted slightly more than five years. During that time, he said the largest and most significant project was finding funding and securing bids to replace all of the water work’s meters. 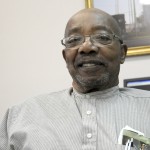 “I think it’s a very important project and I’m pleased that we were finally able to secure and bid,” he said. “Upkeep is going to be easier and reading the meters will go by a lot faster. We can almost read meters for the whole city in one day.”

Goodwin says he is passionate about ensuring fairness in government. In fact, fighting for fairness initially got him appointed to the water board.

Though he was born in Selma, Goodwin moved to Detroit early in life. He spent much of his life working for General Motors as an electrician and chaplain for approximately 2,200 workers. As a Selma native, Goodwin occasionally returned home to visit family. He even brought back some of his hometown’s water to Detroit.

“We would take back as many jugs of water as we could fit and take them back,” he said. “It was good, quality water.”

As he prepared to retire, Goodwin said he wanted to move back to his birthplace. In 1999, for the first time in dozens of years, Goodwin was once again a Selma resident.

He began attending Selma City Council meetings regularly and also began looking into the pay rate for members of the Selma Water Board. At the time, the chairman received $25,000 per year and board members received $800 per month.

“The water board was way overpaid,” Goodwin said. “They were in total violation of state law. Everybody else in the state was only getting $100. “

He took the water board to court and won initially. The case was later thrown out by the attorney general.

When an opening came up for the water board in 2004, the Selma City Council appointed Goodwin to the board. Once on the board, he got members to agree to accept only the state guidelines. In 2008, the chairman position opened up and he took it.

“I made sure we paid the bills and didn’t go bankrupt,” he joked. “I wanted to make sure Selma had the best water possible.”

With several years of experience behind him, Goodwin said he’s excited to help the new chairman, Robert Allen, oversee the new meter installation. He also has another project in mind — finishing the replacement of any old fire hydrants.

“We have replaced a lot of them, but we still have some to go,” he said. “It’s important we finish the project up for fire safety.”