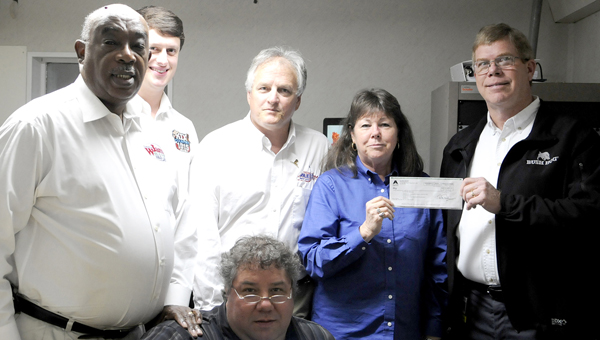 The Epsilon Sigma Alpha sorority was able to raise more than $10,000 to benefit a children’s hospital with some help from a manufacturing company and radio stations in Selma.

Bush Hog representatives visited the radio station studios Wednesday Selma to present the sorority with a $1,000 check for the hospital.

“Many of our employees have benefited from the hospital’s work there, so we wanted to take the opportunity to give back to that,” Bush Hog Human Resources Manager David Middlebrooks said.

Middlebrooks said Bush Hog made the donation to match up to $1,000 of what their employees give and challenged other businesses to do the same.

“Step up to the plate and help St. Jude,” Middlebrooks said to encourage other businesses and the general public.

Treatments invented at St. Jude have helped push the overall childhood cancer survival rate from 20 percent to more than 80 percent since it opened in 1962, according to the hospital’s website.

“St. Jude does wonderful work helping kids,” Middlebrooks said. “Even some of the kids of our employees through the years have benefited greatly through the work they are doing.”

Radio officials said they wanted help a cause that benefits the local area.

“We realize that St. Jude has helped children from this area in the past, and the fact that we can come together with sororities just means the world to us,” KIX Country radio station president Paul Alexander said.

“It just very near dear to our hearts,” Peacock said.

For the first time in its history, the Selma Water Works and Sewer Board will replace all of its water... read more