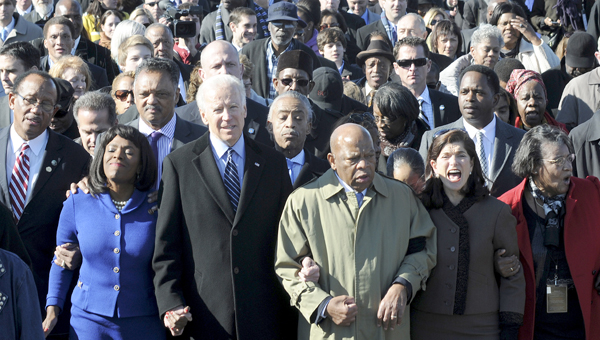 Bridge crossing: The 2014 Bridge Crossing Jubilee will not have Vice President Joe Biden leading the procession across the Edmund Pettus Bridge like last year, but the event will still draw significant dignitaries and huge crowds. (File Photo | Times-Journal)

There may not be a visit from Vice President Joe Biden during this year’s edition of the Bridge Crossing Jubilee, but Selma Chief of Police William Riley said his department is prepared in case other high-ranking dignitaries or government officials pay a visit to Selma this weekend.

“It’s going to be business as usual for us, because even though we might not have the big guns coming in to town, you never know when somebody else of high stature might decide to come in at the last moment,” Riley said. “A lot of time, those top government officials won’t announce they are planning to attend way off in advance.”

Riley said the first wife of former South African President Nelson Mandela once attended the Jubilee. Her visit was unannounced, but the department was ready and able to provide security throughout the visit.

“She came in kind of at the last minute, but we were able to make some changes to make sure her security was in place,” Riley said

Along with the possibility of unannounced visits, the department is prepared for the annual deluge of visitors.

“We may see the number of people in Selma grow by 10,000 or 15,000 people this weekend, so we’ve got to be prepared for that,” Riley said. “We will continue our same patrols, but some people who would have been scheduled to be off may be called in to work for five or six hours to cover some security issues.”

Riley said another reason officers will be working overtime this weekend is to help the department close several roads throughout Selma’s downtown so the bridge crossing, as well as other scheduled events, can be as safe as possible for all participants. While portions of Water Avenue will be closed beginning late Friday, traffic will be able to move along Broad Street until an hour before the march, which is scheduled to begin at 2:30 p.m. on Sunday.

“We close down Broad Street at least an hour before the start of the march on Sunday afternoon,” Riley said. “We need that hour or more to clear the traffic out and to perform security sweeps on the area.”

to make sure there is nothing unusual laying around.”