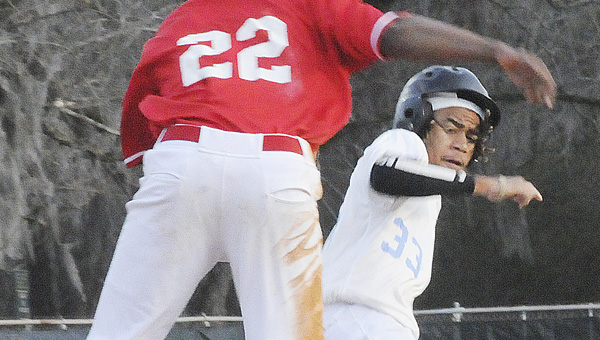 A Selma Saints’ player gets caught in a rundown between third base and home plate in the Saints’ win over Southside Wednesday at Bloch Park.–Daniel Evans

Selma scored five times in the first two innings as the Saints raced past Southside 7-3 Wednesday at Bloch Park in the county rival’s first baseball meeting of the season.

Southside (0-1) played its first game of the season, while Selma (4-3) already appeared in midseason form after having already played seven contests. The difference in games played showed early, as Southside throwing errors turned into early runs, which created a deficit the Panthers were unable to dig themselves out of.

“We had a lot of throwing errors, we had some walks but the throwing errors and fielding errors were the reason they got the runs,” Southside head coach John Solomon said. “I think they only had about three or four hits but beside that they got all of their runs off of errors.”

The Saints took a 2-0 lead on a passed ball in the first inning. In the second, another ball that got by catcher Jaylen Colvin scored a Selma base runner, giving the Saints a 3-0 advantage. The Saints added two more runs  in the second inning. Davian Brantley scored when Selma’s Aaron Drake reached first on a throwing error to give the Saints a 5-0 lead.

Meanwhile, Selma’s pitching and defense kept the Panthers at bay. Desmond Williams started on the mound for Selma and Marquell Moorer eventually relieved him for the Saints, but both players were very effective.

When Southside did manage to cause some damage at the plate, the Saints defense picked them up.

“Pitching wise we did pretty good,” Selma head coach Burrell Bonner said. “We controlled the game from the beginning with our pitching and we had a couple of plays that we made, good catches from our outfield.”

After Jakobie Lawrence scored for the Panthers on throwing errors in the bottom of the second, Southside pulled within five runs. In the third, the Panthers threatened again, loading the bases. Chris Raymond singled to score a run and Brandon Oliver scored on a pop fly to pull Southside within 6-3. The rally ended abruptly though, as Javarius Posey overran third base after getting caught in a run down and was tagged out and Khamari Gibbs struck out.

“I expected some errors but not as many as we had, but we can fine tune those errors in practice,” Solomon said. “Other than that, against a team that had about six or seven teams ahead of us, I think we did a good job.”

Selma added another run in the bottom of the fifth to make the score 7-3 Saints.

Southside didn’t seriously threaten to score again until the game’s final inning, where the Panthers managed to get runners on second and third with one out. Marik Black popped out,  but scored Sullivan to bring the Panthers within 7-4 but Raymond grounded out to end the contest.