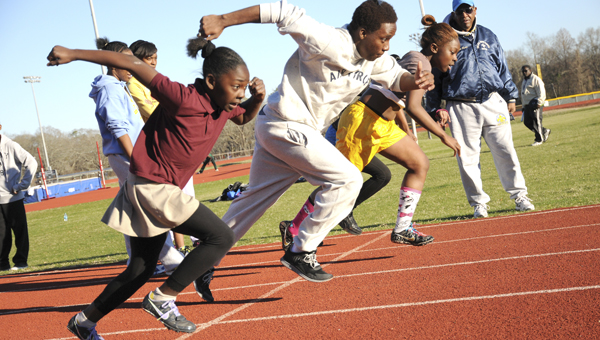 Rashna Walker, left, a member of Walker Track Club, takes off from the starting line against member of the Selma High Track Team Thursday during practice at Memorial Stadium.–Josh Bergeron

A four-month old track club in Selma will send several athletes to a national competition in Maryland next week.

The program, composed of 25 athletes, practices regularly at Memorial Stadium. Its members attend local schools but none of its members are even allowed to participate in school-sponsored track programs.

The Walker Track Club was formed specifically to give elementary school students a chance to show off their running prowess as a part of the Alabama Association of USA Track and Field.

Jeffery Walker, a former athlete at Selma High and current coach of several city league sports teams, created the club last year to provide young school children an opportunity to get a head start on middle and high school competition.

“It’s important to get the fundamentals of track and field so that when the kids enter high school sports, they already have an advantage,” Walker said. “My real goal is to help create world-class track athletes in Selma.”

Though it’s only been a few months, Walker says his athletes have made significant strides.

“Some kids couldn’t jog a lap when we started but now they are running two or three times around the track,” he said. “Some have almost improved by three seconds.”

His club previously competed in the 2014 USA Track and Field South Zone Youth Indoor Championships in Birmingham. During the tournament, Walker said the number of college scouts in attendance surprised him.

“There were several different states there at the tournament,” he said. “Some people came up to me and were asking about our athletes. I thought it was cool, especially for as young as they are.”

Some days, Walker’s club practices side by side with the Selma High team at Memorial Stadium. Some Walker Track Club athletes run alongside the high school students in practice races.

Selma coach Ivory Williams said he has taken note of Walker’s efforts and believes the program to be a solid first step toward high school athletics.

“Some people just come out and think they can run faster than anyone,” Williams said. “But there are certain small skills you have to learn — the things that track is all about. I’ve talked with him a few different times and think what he is doing is good for the kids and good for their athleticism.”

But Walker says his program is about more than sports. Walker says he wants to provide a positive atmosphere for students to gather after school, especially those without a father figure.

“I am trying to make sure children have a positive influence in their lives,” he said. “I love the challenge and challenge the kids to compete to the best of their ability.”