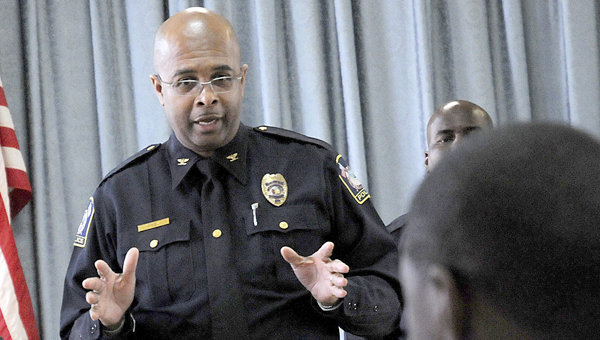 The Selma Police Department kicked off its Police Encouraging Academics, Reading and Learning program by rewarding Clark students with a pizza party for their reading prowess. Tamera Carter’s fifth grade class won the party after greatly increasing test scores from August and December.

Selma Chief of Police William Riley said the program is aimed at familiarizing students with the police department and encouraging students to read more often.

“You cannot do anything without reading comprehension,” Riley said. “As police officers we see the end result of learning. If students perform better in school they are less likely to engage in criminal activity.”

“We know once police engage in the community in a positive sense then residents are more likely to cooperate and help us report criminal activity,” he said.

After the party, Clark Elementary principal Aubrey Larkin said he was proud of the class for the large improvement in test scores and hopes students will continue to increase their reading habits.

“[Elementary schools] are the foundation of learning,” Larkin said. “By reading and focusing on education now, our students are more likely to do well when they move on to middle school and high school.”

The students weren’t the only ones rewarded for reading efforts. Carter also received tickets to see Jase Robertson at a praise and worship service on Sunday at Memorial Stadium.