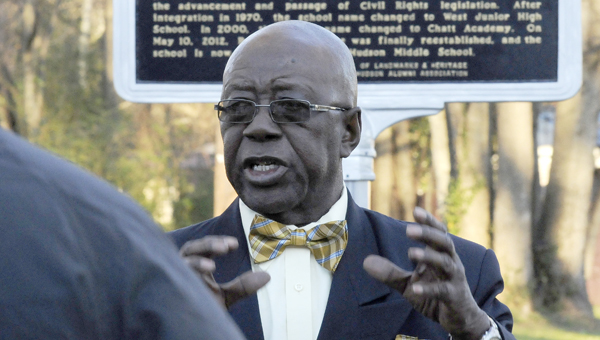 Henry Allen, former fire chief in Selma and a former R.B Hudson High School student, speaks during the unveiling ceremony of plaques at the now R.B. Hudson Middle School, detailing the school’s involvement — and that of its students — in the civil rights movement in the 1960s. (Sarah Robinson | Times-Journal)

A Selma school received an honor Thursday for the contributions it’s alumni made to the civil rights movement more than 50 years ago.

The former R.B. Hudson High School, which is now R.B. Hudson Middle School, unveiled a state-sponsored plaque, recognizing the school’s inclusion on the National Historic Register, honoring the nonviolent protests, marches and other actions the school’s alumni participated in from 1963 to 1965 to ensure equality for all citizens.

Henry Allen, who was a former R.B. Hudson student involved in the movement, recalled the brutal beatings, language and discrimination they endured for justice that led to the passage of the Civil Rights Act of 1964 and the Voting Rights Act of 1965.

“Our generation now really doesn’t know what transpired,” Allen said. “They really don’t understand that freedom was not free. Freedom came at a great cost.”

Allen said the plaque would help future generations remember what was sacrificed for equal opportunities.

R.B. Hudson Middle School principal James Pope said he was elated to learn the school would be placed on the historical trail. Pope said this recognition should encourage students to always stand up for a great cause.

“It shows them the things that we teach them every single day,” Pope said. “As citizens, we have a responsibility to do things and stand for things that will make a change.”

After the unveiling of the plaque and a few words from Allen, the school held a program in the gym featuring song selections from the R.B. Hudson Middle School choir, a lecture from Allen, a speech about the history of the school and more.

R.B. Hudson alumni, Selma Mayor George Evans said he was proud to see a school he once attended receive recognition for its contributions to civil rights.

Evans said the addition of a yet another historical marker would surely attract more visitors to Selma.

“I think it’s certainly another piece to the puzzle as we demonstrate to the world what Selma has to offer,” Evans said.