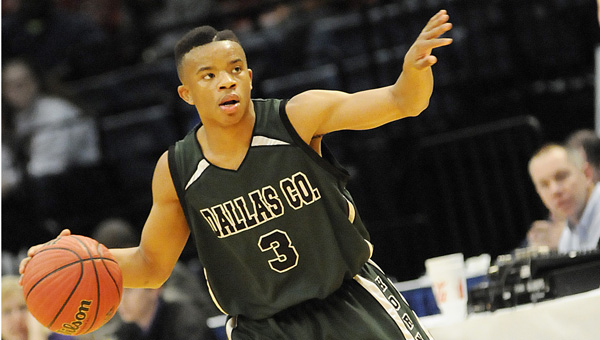 Dallas County point guard Raheem Phillips points out instructions to his teammates in the Hornets’ win over Madison County in the Class 4A state semifinals Wednesday.–Daniel Evans

Lee, who was likely a unanimous choice after his performances in wins over Bibb County and Dora, thought the MVP should have gone to someone else.

“Our point guard [Raheem Phillips] should have gotten (Most Valuable Player),” Lee said.

Phillips had played with a heavy heart after losing his grandmother in the days before the game and went to her funeral directly after the contest. He’d only scored two points in the game, but this year his game has never been about scoring the ball. Instead, he’s focused on finding open teammates and picking his spots to score.

“My coach told me a point guard picks the right time to score and as a point guard the ball is in your hands 24/7 so you can do anything you want with it,” Phillips said. “My teammates believe in me.”

Phillips wasn’t always so inclined to pass. The point guard said he’s been kicked off the team “four or five times”, but in the last few years he’s seen himself transform into a team-oriented player that stays out of trouble.

“I came in here wanting to score and do all that fancy dribbling and [coach Willie Moore] changed my mind,” Phillips said. “A point guard doesn’t do that. A point guard leads the team.”

Moore said Phillips, a junior, has “grown up a lot” after starting at the school as a “hot shot kid that could handle the ball really well.”

“We just tried to get him to buy into the team aspect of it,” Moore said.

“Early in his career he saw everything in how it looks in relation to him. Now he understands that his focus cannot be just on him. Being a point guard, he is going to get judged by how well his team is being run and the success of his teammates.”

Lee has a lot of confidence in his point guard and he’s not afraid to show it.

“I think he could be the best point guard in the state in his class if he gets mentally tough and listens to what coach is saying,” Lee said.