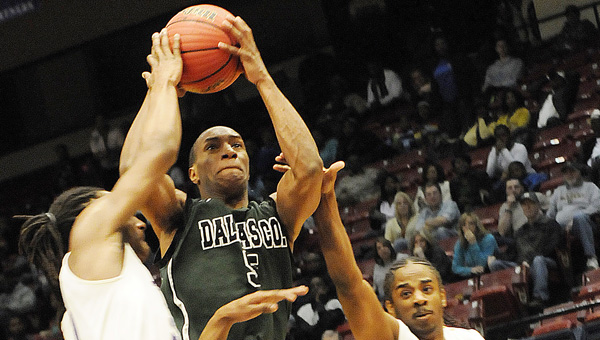 Dallas County’s Jerrod Moorer rises high on a layup attempt in the Hornets’ overtime win over Madison County Wednesday night. Dallas County will play J.O. Johnson Saturday at 11 a.m. at the BJCC in Birmingham for the Class 4A state championship. –Daniel Evans

Moore said no matter what the outcome is, the game should not define the Hornets.

“A lot of teams would love to get to this point and our team has done an unbelievable job, battling through adversity,” Moore said. “I don’t want my players to feel like this team is being defined by winning or losing this ballgame.”

The Hornets, ranked No. 1 in the state, will be playing in the school’s first state basketball championship game when they face the Jaguars Saturday at 11 a.m. at the BJCC in Birmingham.

Before the game, Moore said he will remind his team about their successes and failures this season, but most of all he wants to remind them what’s in front of them.

J.O. Johnson is the defending Class 4A runner-ups, after losing in the championship game to Madison County 28-25 in 2013. Moore said the experience the Jaguars bring to the floor is his biggest concern.

“They played in the state championship game last year and they were the runner-up, so they are really motivated to try to complete the task and become champions,” Moore said.

He compared the Jaguars to Bibb County, because of the athleticism they have. That concerns him, but one thing Moore isn’t worried about is his team getting butterflies.

“I’m not worried about nerves because we made it to the final day of the season and you’ve got the two best teams in the state playing,” Moore said.

“I don’t see it as pressure. We don’t feel like there is any pressure on us. We weren’t the ones that were runner-ups and played in this game last year. They are expected to win.”

Dallas County is playing in the school’s third final four, but their first one since the 1990’s.