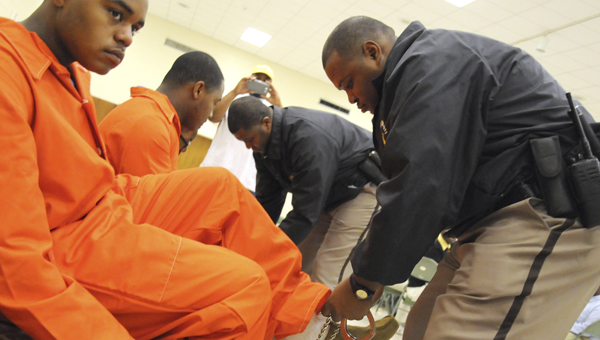 The Selma-Dallas County Youth Ambassadors got a taste of life behind bars Wednesday.

A number of local law enforcement officers spoke during the ambassador’s eighth annual High School Prayer Breakfast, warning ambassadors and high school students about the consequences of committing crime. Ambassadors also wore orange jumpsuits, pretending to be criminals who were arrested after a shooting.

“What you are seeing right now, in front of you, is really what it looks like when you walk into the courtroom,” District Judge Bob Armstrong said about the actors dressed in jumpsuits. “It is really a gut wrenching experience. I have seen plenty of good, young people make bad decisions in the moment.”

Armstrong also described the process a juvenile suspect would face after being arrested. A bond hearing is usually held several days after the arrest, where Armstrong decides whether to increase or decrease bond amounts.

“Sometimes when we get [juveniles] in our office they ask for their mom, ask ‘why are we here’ and start crying,” Riley said. “At that point it’s too late. There is no pity when you hurt someone or take someone else’s life.”

“Our jail is not a hotel room,” Cole said. “You get what we can give you.”

“Once you post bond and get out of jail, you are in my jail,” Leashore said. “You are mine until you are adjudicated, guilty or not guilty. If I tell you to be in bed by 9 p.m., you better be in bed at that time.”

Crime statistics for juveniles have decreased sharply in recent years, but Armstrong said 18- to 30-year-olds remain among the highest percentage of Dallas County residents that commit crime.

All speakers said the ambassadors have high moral character and are unlikely to be in the situations described. In spite of their character, Armstrong said ambassadors still have a duty to prevent crime in Dallas County.

“You all would probably never be in the situation,” he said. “But as leaders, you can help spread the message to your peers. You can change their ways and set the example.”

Dallas County’s William Lee finishes off a dunk in the second half of Wednesday’s Class 4A state semifinal game in... read more