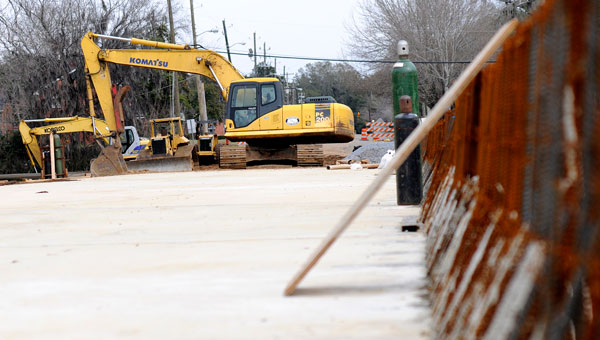 The Dallas Avenue Bridge is several months from completion, but one Dallas County resident is already thinking of names for the structure.

The Alabama Department of Transportation says the bridge is on schedule for completion by May 1. As it nears completion, Dallas County resident James G. Smith says officials should name the bridge in honor of Howard Walter Gilmore, Selma’s only Medal of Honor recipient.

“It’s something that has been turning around in my head for almost five years,” Smith said. “Each time I have tried to get his name on something it either fizzled out or didn’t materialize. The reason I chose the bridge is because it is being upgraded, and what better way of christening it than with a true American hero’s name.”

Gilmore worked his way up through the naval ranks and was eventually named executive officer of the submarine U.S.S. Shark before the war and took commanded of another submarine, the U.S.S. Growler, four months after the attack on Pearl Harbor in February 1942.

He later distinguished himself as a submarine commander during World War II in the Pacific Ocean and died at night on Feb. 6 or in the early morning hours on Feb. 7 while surfacing the submarine.

According to U.S. Navy records, a Japanese crew began a barrage of machine gun fire after spotting Gilmore’s submarine. The fire killed the assistant officer of the deck and wounded Gilmore and two others, according to records.

After being wounded, Gilmore ordered his sailors to “take her down” and the submarine began its descent into the ocean’s waters. According to records, Gilmore wouldn’t have been able to get inside the vessel in time for the ship to escape. Gilmore remained outside of the submarine as it descended. He wasn’t seen again.

Following his heroic death, Gilmore was posthumously presented with a Congressional Medal of Honor.

“What could be anymore outstanding than giving your life for your country,” Smith asked of Gilmore’s death. “I don’t think you can ask anyone for any greater service. The Dallas Avenue Bridge should absolutely be named for Gilmore.”

Smith is proposing a sign be placed on either end of the Dallas Avenue Bridge stating the structure’s name.

But, before plaques can be hung and ribbons cut, a resolution must be passed in the Alabama Legislature, according to the Alabama Department of Transportation.

State Rep. Darrio Melton, D-Selma, said he wasn’t familiar enough with Gilmore’s life to push for a resolution, but spoke about the kind of individuals he feels are deserving of structures named for them.

“I think that the individual would have to have contributed to improving the quality of life in the area,” he said. “They have to have a notable impact for our area, state, or our nation.”