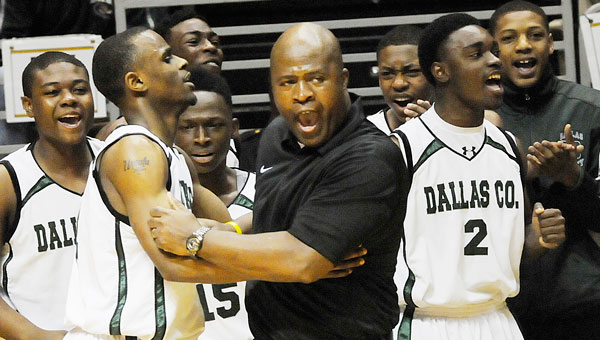 The Hornets have already made history, but now they hope they can make a little more. Dallas County head coach Willie Moore said he wants to win the state championship game as bad as his players do, but first his team has to focus on getting there. Moore has told his team this week to take it all one day at a time.

“What you did Saturday was Saturday,” Moore said. “The stakes are a little higher today going into this tournament and that has been our attitude all season.”

Practices for the Hornets this week have focused around the Tigers’ ability to force turnovers and turn Dallas County’s methodical style into a fast–paced, up-tempo type of game.

“They do a lot of pressing and trapping all over the floor and we just need to make sure we are sound in what we are doing, not feed into the frenzy,” Dallas County head coach Willie Moore said. “They want to play an up-tempo, helter skelter game.”

Moore compared Madison Academy’s style to a version of “organized pick-up ball.” His team practiced hard Monday in preparation, bracing for quick shots and running after rebounds like their season depended on it.

“They want to create a loss of chaos and we just have to be a disciplined team,” Moore said.

When the scoreboard strikes zero Wednesday night, Moore said whichever team made the least amount of mistakes will advance to the state championship game.

“I think the little things are going to decide the outcome of this game,” Moore said.

“If talent is equal then I think the deciding factor is going to be the team that takes care of the basketball the most.”

While Moore worries that Madison may speed up the game and force enough turnovers to take Dallas County out of its game plan, he is just as concerned with the confidence and experience of the Tigers, who know what it feels like to be on the big stage.

“Where our kids know we have a real big game, but they don’t really understand what they are playing for and playing against the defending champion, they know exactly what it takes to get it done because they have done it,” Moore said. “They have proven that they are able to do it.”

Even though the Tigers’ experience concerns him, Moore’s message to his team is pretty clear: Last year was last year.

“I have told my kids that you don’t get credit for what you accomplished last year [for] this year,” Moore said

The game is scheduled to start at 7:30 p.m. Wednesday at the BJCC in Birmingham.