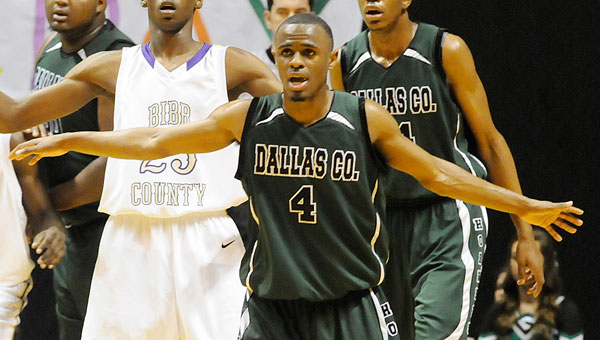 Dallas County’s Kendell Motley waits for Bibb County to bring the ball up the court in the Hornets’ win last week in the Central Regional semifinals. (Daniel Evans | Times-Journal)

PLANTERSVILLE — In basketball, a box score tells a lot. It gives all of the points, rebounds, assists and numbers that a player and team put up over the course of a game, but sometimes it fails to tell the whole story.

Dallas County guard Kendell Motley is never going to shine on a box score, because it’s hard to statistically define shutting down the opposing team’s best player, but that doesn’t bother him. He knows what his role is on the Hornets, as does head coach Willie Moore.

“He means so much to us from a defensive standpoint because he defends the team’s best player and it doesn’t matter if they are 6’5” or 5’5”,” Moore said. “He has done an unbelievable job.”

Motley knew in order to make a difference on the varsity he’d have to become a great defender. Now that he has, Moore asks him to make life miserable for the other team’s best scorer.

“It feels good because it shows me that coach has a lot of confidence in me to go out and lock their best player,” Motley said.

During the Hornets’ championship run, his defense has made a big difference.

Motley guarded Dora’s Kenton Petties on Saturday in the Central Regional championship game. Petties, who was coming off of a 22 point performance against Dadeville, was 0-for-15 from the floor. In the regional semifinal, Motley guarded Bibb County’s Danjel Purifoy — who is being recruited by schools all over the country, including Kentucky — to only 14 points.

Motley said his mindset is to stay in his role and not worry about scoring.

“I’ve got other people around me that can score better than me and I know that defense turns into offense,” Motley said.

“I know I’m going to get my points off of playing defense first and that is the only way we are going to bring it back home is if I play defense first.”