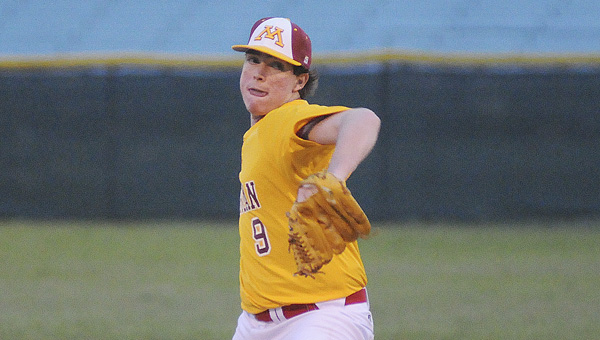 The Morgan Academy Senators (1-2-1) used a seven run fourth inning to roll past Kingwood Christian Academy 9-2 for their first victory of the season.

After a tournament at Clarke Prep to begin the season ended without a Morgan win, Senators head coach Jeremy Carter said Monday night’s victory was big for his team.

“It is a good win for the kids,” Carter said. “They needed that win. It is always good to win, especially at home. It lifts them up a little bit.”

The entire game changed in the fourth inning, when Morgan turned seemingly every at-bat into runs.

“We got a couple of walks and we were a little selective with our hitting,” Carter said. “We got two big hits and then had the error in center field that we scored a base hit, an error and he scored from first for an inside the park home run. That really lit a fire in our kids.”

With the score tied 2-2 in the fourth, Morgan broke the game wide open with a plethora of hits in the bottom of the inning. The Senators’ Jackson Henderson and Trey Powe singled in back-to-back at-bats to give Morgan a 4-2 advantage, but Morgan was just getting started. The next batter, Wooham Keemer, doubled to score both Henderson and Powe to extend the lead to 6-2. J. R. Wood followed with a single to left field, which scored Keemer and pushed the lead to 7-2.

Although those runs gave the Senators the lead, the biggest play of the game might have been the one that finished off the seven run explosion.

Morgan’s Clay Copeland singled to center field, where the center fielder bobbled the ball and let it roll behind him. Wood scored and Copeland slid under the tag at home for an in-the-park homerun, which was officially scored as a single with a fielding error.

The mistake by the Lions ended up being a big one, as it pushed Morgan’s lead to 9-2. Both teams offenses bogged down in the later innings, with both teams leaving runners in scoring positions numerous times.

Pitching obviously played a part too.

Morgan starting pitcher Alex Davis, in his first start of the year, shook off a shaky start to the game and shut the Lions down. After giving up two quick runs, Davis settled in and slowed down Kingwood, keeping the Lions off the scoreboard the rest of the way.

The Senators host Tuscaloosa Tuesday in their second game in as many days. This week will be a long week for Morgan, because the Senators are hosting a baseball/softball tournament this weekend.