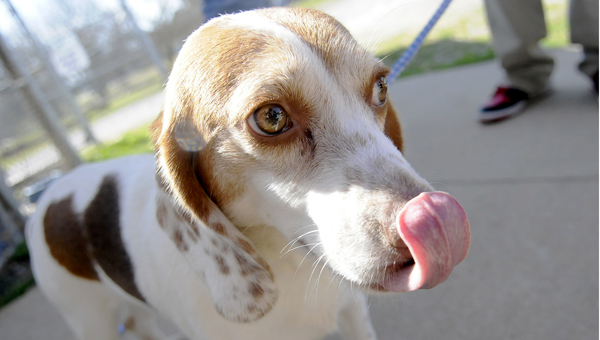 Finding a home: Ceci (above) is one of about 30 dogs headed to Bainbridge, Ga. on Saturday to participate in the Pilots and Paws program. On Saturday, Pilot and Paws will transport dogs from Bainbridge to dozens of other cities around the nation. (Josh Bergeron | Times-Journal)

More than 30 Dallas County natives are traveling to Bainbridge, Ga. this weekend to find a family.

Wannabe Rescued, a local organization that focuses on finding homes for abandoned animals, will transport 36 dogs to Bainbridge on Saturday to participate in the Pilots and Paws Program. Once the dogs arrive in Bainbridge, the 20 participating pilots will bring the animals to various animal shelters throughout the South.

Wannabe rescued member Debbie Clark said getting the dogs out of Selma is critical in finding homes for the animals because of a low adoption rate locally. Without being adopted, many animals are tagged for euthanization. In February, Clark’s organization transported 28 animals from the Selma Animal Shelter to various shelters around the nation. In that same time span, eight pets were adopted locally.

“We just don’t have enough adopters here in Selma,” Clark said. “For a community of our size, we have a large number of stray animals. To add to the problem, some people just dump their animals on the side of the road or outside of the animal shelter.”

“We would definitely be in a worse condition if it weren’t (for) Wannabe Rescued,” Curtin said.

To get the animals to Bainbridge by Saturday, Clark said her organization would drive the dogs to Montgomery, where another volunteer will pick up the animals and continue the journey until reaching Georgia.

Debby Driskell, another member of Wannabe Rescued, said the organization continually checks on the Selma natives until the animal is adopted. She said Florida is unquestionably the largest home for Wannabe Rescued’s animals.

Though the organization serves as the middleman for finding homes for hundreds of dogs each year, paying for gas and veterinary expenses can be a challenge, Driskell said. Each dog requires a visit to a veterinarian before transport, ranging from $35 to $50 per dog per visit.

The Bainbridge trip is estimated to cost at least $1,120 in veterinary fees. Gas to Georgia and food are an added cost.

“We are doing our best, but money is tight,” Driskell said. “We are just trying to find these animals a home. They didn’t ask for the situation they are in.”

To get involved with Wannabe Rescued or to make a donation, email wannaberescued@aol.com.