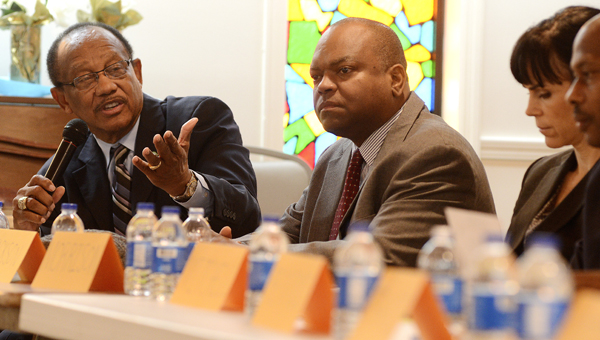 A community meeting was held Saturday morning at Selma’s Mt. Ararat Missionary Baptist Church to discuss how community leaders and community members can work together to solve the issues facing the city.

While Saturday’s meeting was only attended by one to two dozen citizens, Selma Mayor George Evans said it was still something he thought was important to be a part of, in light of recent violent crimes in the city

“Any one of us here can make a difference, I believe that,” Evans said. “We have a population in Selma and Dallas County that is 40,000 people, and it doesn’t take 40,000 people to heal our land.”

Evans said the “No More” campaign, which he started in the weeks following the December shooting death of Selma High School student Alexis Hunter, along with events like Saturday’s discussion, could both be a part of the solution to issues affecting the city.

“This program is just another piece of that puzzle,” Evans said. “And [the No More] signs by themselves don’t have a whole lot of meaning, but No More could mean so much for all of us. It would mean no more drugs, no more crime, no more killing.”

Another issue widely discussed during the meeting was the issue of recidivism amongst convicted felons in Selma, as well as across Alabama.

Paul Mitchell, probation and parole officer with the Alabama Department of Pardons and Paroles, said much of the responsibility to keep convicts from returning to prison time and again falls on the older and wiser members of the community.

“What we need are the seasoned men of this community,” Mitchell said, pointing to a table of middle-aged men. “We need them to teach the young men how to be real men, and to put a stop to this violence.”

“Meetings and organizations can’t solve these problems, you’ve got to do it yourself,” Bumbrey said. “It’s time for everybody in Selma to take a long look in the mirror and ask if they are doing all they can to help.”

Bumbrey, who moved here seven years ago with his wife after she retired, said he volunteers at Selma High School and said several issues affecting young people in the city, including violence and drug use, can be lessened by simply working with the young people.

“You just have to tell them you care about them,” Bumbrey said. “That thought won’t get through to all of them, but they just don’t hear it enough. And I think if we just look them in the eye and tell them we care about them that can be the start of something great.”

An $80,000 grant awarded to the Alabama Scenic River Trail will be put toward the purchase of new signs to... read more