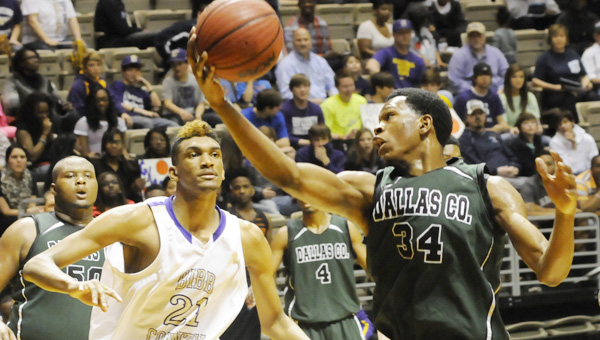 Dallas County’s William Lee reaches out to catch a pass in the Hornets win over Bibb County. –Daniel Evans

MONTGOMERY — In a battle of top five teams and two highly touted recruits, No. 1 Dallas County used free throws and defense to pull away from No. 5 Bibb County in a 50-40 win in the Central Regional semifinal Thursday at Alabama State University.

In a showdown of two of the states highest rated players, Dallas County’s William Lee scored 15 points, one more than Bibb County’s Danjel Purifoy, and helped the Hornets advance to the Central Regional championship game Saturday at 10:40 a.m. against Dora.

“I was really confident going in because I knew before the game the kids were ready to play,” Dallas County head coach Willie Moore said.

“There is something different about this team, in particular just their focus on the bus ride here.”

The Hornets certainly kept their cool with the game on the line.

With the score tied 35-35, the Hornets scored the first nine points of the fourth quarter. Lee made a layup and then knocked in two free throws during the run as Dallas County threatened to run away.

“We started to pressure their guards a little bit more,” Moore said when asked what the difference in the fourth quarter was. “They sort of lost their focus and started taking quick shots.”

Purifoy answered with a three-pointer to pull the Choctaws to within 44-38 with 3:12 remaining in the game, but on the ensuing Dallas County possession, Purifoy committed an intentional foul and picked up his fifth foul, ending his game.

“Essentially when he took [that foul] it was pretty much the ballgame,” Moore said. “I knew we still had a couple minutes to play out but he is the type that when we went on the run he struck a deep three. I mean, what can you do? He made it deep and if he had not made that shot we stood a chance to go up ten or eleven at the time.”

Purifoy’s three had drawn the Choctaws closer, but without him on the floor Bibb County was unable to muster enough offense to complete the comeback.

The Hornets made their free throws in the final three minutes and distanced themselves from the Choctaws.

Lee said he focused on trying to attack Purifoy when he saw him around the basket.

“Every time I saw him at the basket, I was thinking about foul, make a foul, draw the foul because if we could get him out of the game we had the game won,” Lee said.

For Moore, the win meant a victory against the school where he graduated from in 1988 and where he coached from 1997-2005.

“Because I coached there and played there, I knew those kids were going to come out and play, just for the simple fact that eight of the 13 or 14 that they’ve got are relatives of mine,” Moore said.

The first half set the tone for what would be a tight game.

The Hornets led 13-12 after the first quarter. Raheem Phillips made an acrobatic layup through contact and the resulting free throw for a three-point play to give Dallas County a 24-22 lead at halftime.

In the third quarter, Bibb County took a 35-32 lead on a three pointer by Jamesio Rhine but the Hornets answered with free throws by Jerrod Moorer and an aggressive move and layup by Lowell Furlow to tie the game 35-35.

In the final quarter, the Hornets started the quarter on a 9-0 run and didn’t look back, advancing to a regional final for the first time in Moore’s tenure at the school.

Dallas County has never made it to the Final Four, but the Hornets will try to change that Saturday when they take on Dora in the regional championship game.

Concordia College Alabama’s Dijon Vaughans and teammates do an agility drill Tuesday on the Edmund Pettus Bridge.–Daniel Evans Over the... read more