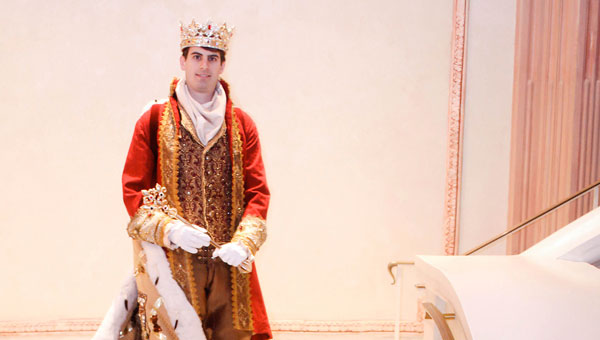 New York City resident Sewlyn Turner IV will serve as Mobile Carnival Association’s King Felix III. Turner, who was born in Selma and grew up in Mobile, said he was honored to learn he would be leading the court, charged with spreading merriment throughout the city of Mobile during the Mardi Gras celebration in downtown Mobile.

“I definitely never imagined that I would be in this position,” Turner said. “It was a great surprise and a very pleasant surprise.”

King Felix III, the ruling monarch, and his queen are selected by the Mobile Carnival Association nearly a year in advance of Fat Tuesday. Individuals scheduled to take on the responsibility as king or queen are asked to visit Mobile with their family, live in local hotels and enjoy the parties and balls at Mardi Gras.

“The Mobile Carnival Association has someone to be king based on the fact they are looking to perpetuate Mardi Gras, so a lot of times their family has been involved in Mardi Gras for many years in the past,” Judi Gulledge, the executive director of the Mobile Carnival Association, said. “They want that person to be a good spokesperson and ambassador for the city of Mobile.”

“It’s a great honor to be asked,” Turner said. “Through trying on my robes and trying on my crown and all that, I have gotten a little bitty taste of what it’s going to be like.”

Like many kings before him, Turner is not the first of his family to earn a royal title over the Mobile Carnival Association’s Mardis Gras celebration.

Turner’s sister, Sarah Alice, was named queen in 2006, his great-aunt, Alletta Turner, ruled as queen in 1923, and his cousin, Chad Slayton, held the King Felix III title in 2008.

Even though he has had many family members reign as royalty over Mobile’s Mardi Gras celebration in the past, he said he never expected to receive such a prestigious honor.

“It was a total shock,” Turner said. “I was actually more surprised than anything that I would be asked, and I am thankful to sort of have experienced some of their reigns.”

Turner said he is prepared to enjoy this opportunity to the fullest.

He said the experience is sure to bring him closer to Mobile.

The Mardi Gras season has been going on for weeks in Mobile — the birthplace of Mardi Gras.

Mardi Gras culminates on Fat Tuesday, this year landing on Tuesday, March 4. The following day, Wednesday, March 5 is Ash Wednesday and begins the season of Lent.