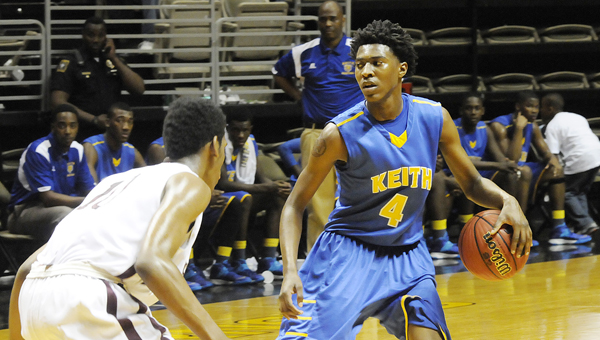 MONTGOMERY —  No. 4 Keith saw its season end Tuesday night in a 83-60 loss to No. 1 St. Jude in the Central Regional semifinal at Alabama State University.

The Bears were overwhelmed from the opening tip by a Pirates team that seemed out to prove that, like the rankings said, it was the best team in Class 1A.

Keith head coach Tommy Tisdale, while admitting the Bears had aspirations to go further than Tuesday night, was upbeat after the loss and proud of what his team had accomplished this season.

The Bears trailed 18-13 after the first quarter and it was all downhill from there. Keith managed just twelve points in the second quarter and watched the Pirates’ lead balloon to fifteen points at the half.

The second half was no different.

The Bears were unable to get back into the game, never cutting the lead under double digits the entire second half. By the time the fourth quarter started, the lead was already up to 20 points.

“We didn’t convert at times,” Tisdale said. “We got shots we wanted. I wanted to take 72 shots. I would’ve taken 80 if they had let me. We took 72 and they took 65. I think the turning point was in spots we got outhustled.”

The Bears were without one of their starters for the game, as Walton Young did not play because of a “coach’s decision”, according to Tisdale.

The Bears who played found it hard to make shots consistently. Keith’s Anfernee Simmons scored 13 points total on 4-of-30 shooting, including going 1-for-13 from three-point range. Jaquan Simmons was only 2-of-8 from the field.

The one Bear who seemed to have a good night was John Pettway, who scored 18 points and made eight of Keith’s 23 made shots on the night. No other Bears’ player made more than Anfernee Simmons’ four.

Needing to make up points in a hurry the Bears tried shooting from beyond the arc, but never found their footing from three-point land, going 2-for-18 in the game.

On the other hand, St. Jude didn’t seem to have any problems shooting the basketball, going 32-for-65 from the field.  Tommy Burton scored 28 points for the Pirates, including a couple of dunks that brought the Pirates’ portion of the crowd at the Dunn-Oliver Acadome to their feet.