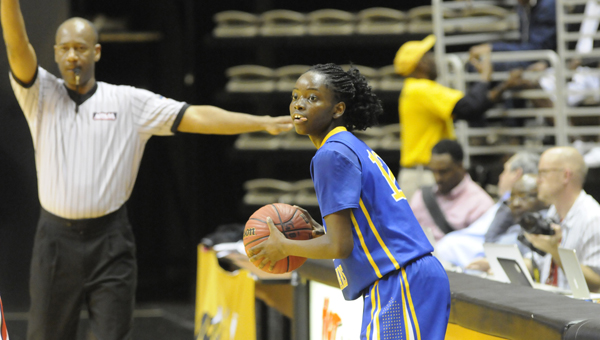 MONTGOMERY — Keith’s Lady Bears (21-8) were unable to overcome a three-point third quarter in a 40-30 loss Tuesday to Loachapoka (25-2) in the Central Regional semifinal at Alabama State University.

The Bears led at halftime 20-18, but trailed 28-21 after three quarters where the Bears simply could not make their shots.

“[We were] not getting the ball inside,” Williams said. ”They doubled my guard so when they started doubling her, my other guards kind of went away forcing them to make that long pass. In a pressure situation, they didn’t handle it well.”

Last season, the Lady Bears defeated the Indians with a last second shot. Loachapoka head coach Anthony Edwards said his team learned a lot from that game. This year he said his team put an extra emphasis on taking Winchester away. It paid off. Winchester shot 3 of 10 from the field and scored nine points in the game.

Williams said it was easy to see where the Indians adjusted for this season’s matchup between the two teams.

“The main thing they did was when [Winchester] got it they tried to double [her] and make her get it out of her hands,” Williams said. “

The Bears did not make a three-pointer the entire game, with Stephanie Carson and Winchester combining to go 0-for-11 from three.  Carson, who finished 0-for-8 from down town in the game, also had a lousy shooting night in last season’s matchup with the Indians, but she hit the game winner at the buzzer to send the Bears to the Final Four.

This time there was no magic left.

The Bears were outrebounded 34-31 and turned the ball over 26 times. St. Jude found its shooting touch in the second half, led by Normesha Pits and Keremi Vinson, who each scored 12 points in the game.

“We didn’t play our game,“ Williams said. “Some of my girls got away from what we usually do and that was the difference. We didn’t play Bears’ basketball.”

But in the first half, it looked like Keith might be prepared to play in its second consecutive regional final. Winchester scored eight of her nine points in the first half and the Bears led 18-16 at the break.

Everything changed during a 9-0 run by the Indians in the third quarter, allowing Loachapoka to take a 30-21 lead after three quarters. Pits made two three-pointers in that stretch and Keith was unable to find the basket to answer.