‘I am always fighting for Selma’ 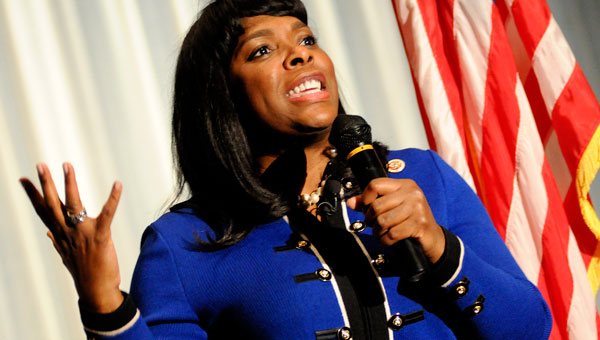 Sewell, a Selma native, spoke Tuesday in a town hall meeting at the Striplin Performing Arts Center about important legislation passed in 2013 and future goals as she runs for re-election.

She began by addressing unemployment in the Black Belt and efforts to increase job readiness for Selma residents.

In the past several months, Sewell’s staff has organized job readiness fairs in Birmingham, Selma and other areas of her district.

“I think we have done a tremendous disservice to our youth by moving away from technical skills training in high school,” she said. “Unemployment was at 14 percent when I took office and now it’s 9 percent. That’s still not where we want it to be but I think we need to do a better job of preparing our youth for careers after school.”

Sewell continued by discussing her first successfully passed piece of legislation, which awarded a Congressional Gold Medal — Congress’ highest civilian honor — to four girls who died during the 1963 Civil Rights Movement in Birmingham as a part of the 16th Street Church bombing. Addie Mae Collins, Cynthia Wesley, Carole Robertson, and Denise McNair. According to an FBI report, Ku Klux Klan splinter group the Cahaba Boys bombed the church as a hate crime.

Sewell said the measure was difficult to get passed because a supermajority of U.S. Senators and Representatives was needed to sign the bill before it can come up for a vote.

Sewell also addressed the Alabama State Board of Education’s decision to intervene in the Selma City School System.

“I grew up in this system and got my education right here in this city,” she said. “I know that we can overcome our weaknesses and work together to get our schools back where they need to be.”

As she comes up for re-election this year, Sewell said she will continue fighting to improve her hometown from Washington D.C. Some of her goals include securing funding for and promoting the 50th anniversary of Bloody Sunday and the Bridge Crossing Jubilee. Sewell said she also wants to secure additional money to improve housing projects in Selma through the U.S. Department of Housing and Urban Development.

“This is my home and I wouldn’t be worth my salt as a member of Congress if I didn’t try to make a difference at home,” she said. “In every piece of legislation and funding bill that comes down I am always fighting for Selma.”