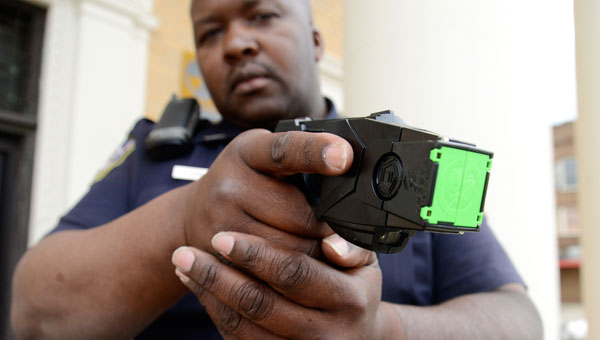 Selma Police Department Officer Nathan Gibson aims one of the 27 new tasers the department received earlier this month. The weapons can be used to neutralize a subject at close range or up to 25-feet from the firing officer. (Jay Sowers | Times-Journal)

Officers with the Selma Police Department have a new weapon in their arsenal; one they hope can further limit the need for them to use deadly force.

Two weeks ago, the Selma Police Department received 27 stun guns. The weapons have been handed out to patrol officers after each underwent eight hours of training on the weapons system.

Police officer Nathan Gibson, who has helped train others within the department on the stun guns, said the new X26P taser was a welcome addition to his arsenal.

“I’m glad we have them,” Gibson said. “Some people are immune to the [pepper] spray, so this is a lot more of a deterrent when people are being disorderly. When people see this, they will know this is 50,000 volts that will incapacitate you.”

Selma Chief of Police William Riley said the stun guns would be used in situations where the department currently uses OC spray, commonly referred to as pepper spray, or asps, also known as batons, in hopes of preventing the need to use a gun.

“Those three items, the spray, the asps and the tasers, will be largely interchangeable, depending on the situation,” Riley said. “After those options, is deadly force, which we hate to use. We are going to do everything we can to avoid using deadly force.”

During their training on the stun guns, officers with the Selma Police Department had to learn first hand about the physical effects of being shocked by the weapon. Gibson said the experience of being shot by the stun gun convinced him early on about the effectiveness of the system.

“I was shot in the back and I can tell you, I would advise anybody to get tased,” Gibson said. “I held it together, but it did drop me down to my knees.”

Gibson said the tasers could be used as a stun gun at very close proximity to the target, but that they also have a range of 25 feet if was needed during an altercation.

“These do have a 25-foot long cord with little prongs on it,” Gibson said. “So we can reach out and touch somebody 25 feet away from us. And if someone is still being disorderly after the first, as long as the probes are in them, we have the capacity to taser them again to try and get them to comply.”

Whether at close range or from farther away, Riley said the officer could not shock the subject for an extended period of time because of safety measures built in to the weapon.

“These particular tasers are set up to have a five second burst, and that’s it,” Riley said. “That’s important because you won’t get to the point where someone can be mischievous and keep shocking somebody else.”

Gibson said if the prongs remain in the subject, the weapon would recharge and allow them to send another shock to the victim.

Riley said the use of the weapons would be treated the same as the use of a gun, in that an investigation would follow the discharging of the system.

“There is a mechanism in these tasers where we can plug it in to a computer and it will show how many time it was utilized and the length of the charge,” Riley said. “That’s part of the policy that once it is used, we will download that system so we can maintain it. It’s another check and balance for us. It checks the police officers to make sure they are doing what they are trained, and it’s a check for the general public because it helps the police police themselves.”

Southside will still log a lot of mileage on the road this season, but the Panthers do a get a... read more