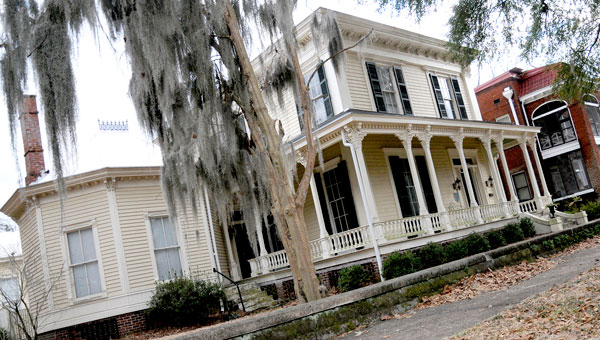 This house, located at 626 Selma Ave. in Selma, is one of six houses that will be featured during the 2014 edition of the Selma Pilgrimage. The pilgrimage is scheduled to take place on March 14th and 15.(Josh Bergeron | Times-Journal)

Tourists planning to visit Selma for the 39th annual pilgrimage now have a final list of houses that will open up their doors for the event.

A total of 14 buildings and events will be featured on the tour, which takes place March 14 and 15. Included on the list are the Vaughan-Smitherman Museum, Kenan’s Mill and Old Depot Museum. Six houses are also on the list.

Event organizer Candi Duncan said locations were chosen based on the owners willingness to volunteer their home.

“We are really grateful that the people were nice enough to allow us to tour their homes,” Duncan said. “Some of the houses are great because of the architecture but others have beautiful interior furnishings. Every house is unique in its own way.”

Dr. Brendan Wyatt, who owns 623 and 613 Selma Avenue, said he volunteered his houses because they have historical value and an interesting story. For example, Wyatt said the brick on 613 Selma Avenue were moved into the city limits from Cahawba — the first permanent state capital of Alabama that now serves as a state historic site.

Tickets range in price depending on the amount of attractions included. Money from the pilgrimage will be used to pay for the original YMCA on Broad Street, Duncan said.

Information about tickets and the list of features buildings can be found on the Pilgrimage’s website, SelmaPilgrimage.com. Those interested could also call Duncan at 412-8550, or email her at tickets@selmapilgrimage.com.