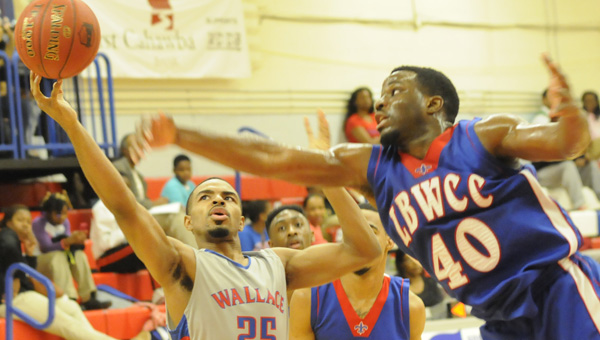 Wallace Community College Selma’s Darrell Stroizer tries to stop the basketball from going out of bounds while Lurleen B. Wallace’s Troyce Manasse leaps towards him to try to get possession of the ball. The Patriots fell just short in the game, falling to 5-9 in games decided by ten points or less.–Daniel Evans

On a night where Wallace Community College honored a former coaching great, the Patriots lost a tight game to Lurleen B. Wallace 84-81.

Former athletic director Lothian Smallwood, who guided the Patriots for 25 years and was inducted into the Alabama Baseball Coaches Hall of Fame in January, was honored before the game Monday night.

Fortunately for Smallwood, who was taking in his first Patriots’ basketball game since 1995, he was able to watch a game that like most of WCCS’ games this season, came down to the final possession.

“I’m used to it now,” WCCS head coach Foster Davis said. “Every game has been like this. Every game this year has been down to the wire.”

The Patriots (8-19) have now had 14 games settled by less than ten points this season. WCCS is 5-9 in those games.

Monday’s game was tied 74-74 with 2:51 left to play, but the Saints took control with a score by Steven Clark and two free throws by Troyce Manasse. The Patriots were able to pull within three in the final minute and attempted three shots to tie the game on their final possession, but all of the three-pointers missed and the game ended in another close loss.

Davis said he had a timeout left, but he wanted his team to keep playing and get a good look on the final possession.

“I like for them to be in the rhythm,” Davis said. “I didn’t want to draw up anything. A lot of times [Harold Scott], the shooter, plays better when he gets in rhythm. That’s who I wanted to get it to.”

This one had the feel of a game that would come down to the final possession the entire second half, with the lead changing hands seemingly every possession down the stretch.

The Saints went on a 7-0 run to end the first half, allowing Lurleen to take a 41-34 lead into halftime, but the Patriots fought back in a hurry. WCCS’ Scott hit a three-pointer with 16:50 left in the second half to tie the game at 42-42. From there, neither team led by more than four the rest of the way, as both teams ran the floor and scored with relative ease in a fast-paced half.

The Saints found themselves in the penalty early in the second half with the Patriots picking up their seventh foul with 12:04 remaining in the game. Lurleen took advantage, making 13 of 17 free throws in the second half.

“That was a big differnce in the game because that enabled us to make free throws,” Lurleen head coach Ricky Knight said. “When we made our free throws down the stretch that is what gave us a little bit of a lead and got us over the edge.”

Along with honoring Smallwood, Monday night was also the college’s sophomore night. The men’s team had nine sophomores playing their final home game.

Wallace Community College Selma’s Lady Patriots (11-12) are on fire and Monday night’s game against Lurleen B. Wallace did nothing to change that.

The Patriots used an all-around team effort to pull away from the Lady Saints in a 68-51 win that keeps Wallace on its recent hot streak as postseason play gets set to begin.

“We are getting something from everybody,” WCCS head coach April Harper said.

“Everybody is settling into what their role is. They are doing what they can do best and that has helped us a lot.”

Monday was also about sending out sophomores Takeela Mixon and Jameneshia Carver with wins in their last home game at Wallace.

“It means everything,” Harper said. “This is their last time playing at home … and they did it for their teammates.”

The Patriots have now won eight of their last nine games and sit in second place in the Alabama Community College Conference’s southern division.

Monday’s game was never really much of a contest.

The Patriots led 37-19 at the half and Lurleen could not get within 15 points in the second half. Every time it looked like the Lady Saints might make a run, the Lady Patriots closed the door.

With her team’s lead down to 55-40 in the final five minutes, Kendra McCovery hit a three-pointer to stretch the lead. Minutes later, she hit another three and Wallace put the game away.