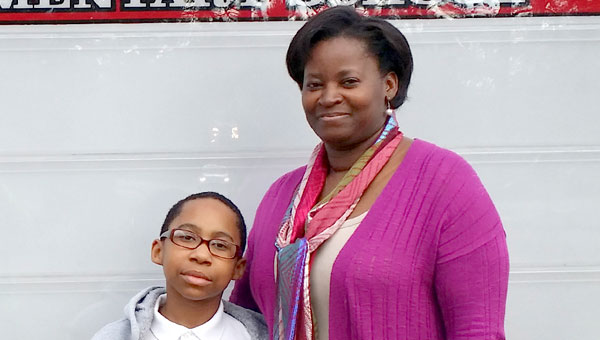 Meadowview Elementary fifth grader Toney Hall poses for a picture with his teacher, Rita Carmichael. Hall was selected by organizers of the Alabama River Chili Cookoff as the T-shirt winner for the upcoming event. (Submitted Photo | Times-Journal)

The T-shirts that will be available for the upcoming Alabama River Chili Cookoff will sport the artwork of a local elementary school student.

In addition to having his artwork on the back of the T-shirt, Hall will be recognized at the cookoff, scheduled to take place Thursday, March 13, as well as a certificate documenting his achievement.

Also, the Alabama River Chili Cookoff will make a $250 donation to Rita Carmichael’s class, where Hall is a student.

Hall, who wants to grow up to be a paleontologist, researching fossils and dinosaurs, said he is fond of his Meadowview Elementary School family.

“I love Meadowview and how nice the people are and how welcome they make me feel,” Hall said.

Carmichael, who has been teaching at Meadowview Elementary for three years is ecstatic Hall’s artwork was selected to appear on the back of the event’s T-shirts.

“Fifth grade is a huge transition to “big kid” school and I am so excited that my school and class was chosen for this amazing project,” Carmichael said. “In addition I am so proud of Tony for working so hard he has been through a lot in the last year and I know his grandmother is going to be proud of him as well”

The annual Alabama River Chili Cookoff is a creation of Leadership Selma-Dallas County Class XVIII. Proceeds from the event go to support one local charity each year.

The charity selected this year is the Cahaba Center for Mental Health.

This also marks the second year where the event’s commemorative T-shirts have carried with them artwork designed by a local elementary school student.

“I hope that the Chili Cookoff organizers will continue involving the children. They need to be inspired,” Carmichael said. “This competition is about more than just money, this is real life and in life when you work hard, your hard work eventually pays off.”

Both Carmichael and fellow Meadowview Elementary fifth grade teacher Alicia Sampson have incorporated chilis into their lesson plan as part of their culture project.

The Alabama River Chili Cookoff will be held Thursday, March 13 in downtown Selma on Water Avenue, beginning at 5 p.m. Admission is $5 and children 8 and under are free.