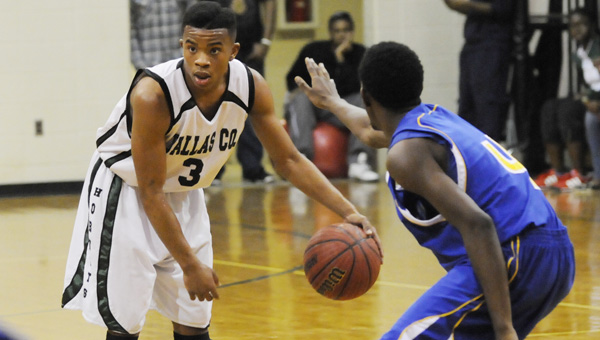 Dallas County’s Raheem Phillips looks at head coach Willie Moore for instructions in the second half of the Hornets’ win over Beauregard Friday night. Dallas County will face the winner of the Bibb County versus Carbon Hill game that will take place Saturday in next week’s regional contest at Alabama State University.–Daniel Evans

PLANTERSVILLE— It wasn’t easy, but No. 1 ranked Dallas County is headed back to Montgomery for the second consecutive season.

Despite the big offensive numbers, Dallas County head coach Willie Moore said in the fourth quarter the difference was a defensive adjustment. For three quarters, the Hornets were hesitant to extend their defensive pressure — something Dallas County has thrived on this season — because Beauregard might be able to get Lee into foul trouble.

“[Lee] didn’t have but one foul going into the fourth quarter so we extended our pressure knowing he could be more aggressive about challenging for blocks,” Moore said.

Beauregard head coach Dewayne Drakefor said with all the options Dallas County has at its disposal, his team had to play man-to-man defense.

The Hornets went on an 11-2 run in the fourth, aided by their defense, but Lee highlighted the run. He rebounded his own missed free throw in the fourth and made the put back to give the Hornets a 55-51 lead. Seconds later, he knocked the ball away from a Beauregard ball handler and dove on the floor and Moore called timeout, securing a Dallas County possession with 5:34 left.

Out of the timeout, Lee scored again pushing the Hornets’ advantage to 59-53. Moorer, who scored 16 points on the night, answered a Beauregard score with a bucket of his own.

With Dallas County up 61-53, Lee delivered the dagger.

Raheem Phillips maneuvered into the lane and lobbed an alley oop pass to Lee, who forcefully dunked the ball and put the finishing touches on another Dallas County win.

“They played a 1-2-2 and we are pretty big inside and [Lee] just scored when he wanted to and the times he didn’t score is because we didn’t go to him,” Moore said, adding that Lee probably could have had at least ten more points.

Instead, the reigning Class 4A Player of the Year had to settle for 29 points and a return trip to Alabama State University, where the Hornets will face the winner of Saturday’s Carbon Hill versus Bibb County game.

For most of the game, Beauregard gave Dallas County a huge scare.

Every time the Hornets threatened to run away, Beauregard answered with a run of its own to keep Dallas County within reach.

In the second quarter, Dallas County looked like it might pull away. Kendell Motley got free for three layups in transition and Moorer finally got open and knocked down a three from the corner and Dallas County led 35-25 at halftime.

Beauregard refused to go away though, as C. J. Perry hit shot after shot in the third quarter to keep his team within reach. With his team down nine, Perry hit back to back three-pointers to bring the score to 41-35.

Beauregard kept chipping away. After Malik Baker rebounded a missed free throw and made the put back, Beauregard pulled within 43-42. On the next Beauregard possession, Baker hit a three-pointer to tie the game 45-45.

From there, Dallas County pulled away.

As of Friday night’s game, Dallas County had not played a road game in exactly one month. Asked if he was concerned about that moving forward, Moore said “no, because we won 15 in a row on the road.”