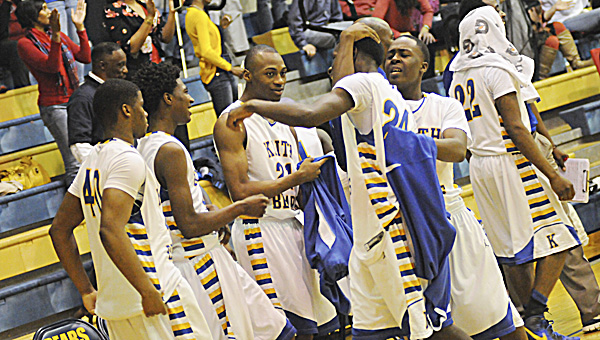 ORRVILLE — For the second time in as many years, the Keith Bears came into a sub-regional playoff game against the Holy Spirit Titans ranked No. 4. And for the second year in a row, the Bears won by more than 30 points.

Keith pummeled Holy Spirit 79-44 Friday in its sub-regional game in Orrville. With the win, Keith is headed to the Central Regional at Alabama State University on Tuesday.

The Bears got off to a quick start by doubling up the Titans in the first quarter and maintaining the lead into halftime.

The Bears’ offense slowed a bit in the second half, but their press defense continued to stifle and confuse the Titans preventing any significant comeback.

Keith coach Tommy Tisdale said his team played good enough to win, but has some work to do if it wants to be a serious contender for the state title.

“I’m confident in the group we have and if we are executing I think we can get it done,” Tisdale said. “I know everyone is going to say the guys played outstanding, but if we give this exact same effort next Tuesday night we’ll lose by ten. “

“A lot of times we were subdued because we relied on our athleticism.”

The Bears were clearly the better team from the opening tip of Friday’s game. Whether it was defense or rebounding, Keith won nearly every aspect of the game. The Bears’ press was particularly effective against the Titans. With five minutes left in the first half, Demond Holmes swiped the ball away from a Holy Spirit player and drove the length of the court.

Holmes went up for the layup, but threw a behind-the-back pass to Anfernee Simmons, who spun around a defender and rolled the ball into the basket with his left hand.

Defense frequently turned into offense for the Bears. While leading 32-17 in the second quarter, Keith guard Walton Young slapped the ball away from Holy Spirit player Addison Young and sprinted down the court. He cast a quick glance across the court, spotting Anfernee Simmons.

Young lobbed the ball toward the rim and Simmons threw it down with two hands, bringing the crowd to life.

On nearly every play it seemed like Keith was faster and more athletic, Holy Spirit Coach Rodney Green said.

“They were just so quick,” Green said. “They were quick to the hole and quick defensively. It seemed like tonight they were just a half step quicker.”

Keith’s offense slowed significantly in the third and fourth quarter, scoring 14 and 12 points respectively, but their defense held strong.

Holy Spirit’s offense also couldn’t match its point totals from the first half scoring eight points in the third quarter and 12 in the fourth.

Keith will face a stiff challenge in the regionals. The Bears will face No. 1 St. Jude Tuesday night at 7:30 p.m.