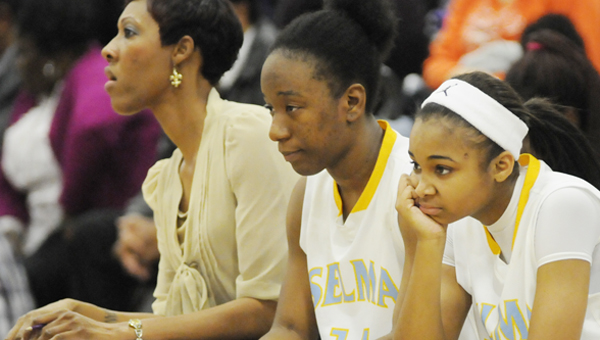 Selma’s Jacquetta Dailey, center, and Jamya Smith, right, look on as Thursday night’s game versus Paul Bryant comes to an end. The Saints lost to Paul Bryant 64-48, which ended Selma’s season. The Saints end the season with a total record of 24-5.–Daniel Evans

The Selma Lady Saints saw their season come to an end Thursday night in a 64-48 loss to Paul Bryant in a sub-regional contest.

After giving up a buzzer beating shot to Paul Bryant’s Marquanda Anderson that gave the Stampede the lead as the first half ended, Selma never led in the second half. The Saints were unable to overcome missed layups and free throws in the second half and Paul Bryant took advantage and will march on to Montgomery.

“They stayed in the ballgame on free throws,” Selma head coach Anthony Harris said. “We missed too many baskets under the goal and defense wise there were some loose balls we should have got that we didn’t get. They were getting two or three shots at a time.”

Harris said he felt his team wasn’t focused before the game and that it ended up costing them a chance to move on. He also realizes that this was a good opportunity for the Lady Saints to chase a state championship.

The first half was a back and forth contest that saw the lead change hands very regularly, but the second half was a completely different story.

“Offense sells tickets and defense sells championships, so we picked up our defense in the second half and did a really good job,” Paul Bryant head coach Nequesha Jones said.

Anderson scored 19 points for the Stampede to lead all scorers. Harris said the goal was to try to slow her down, but the Saints were unable to make that happen.

“She is the key to their success,” Harris said. “She is tough and she plays hard.”

After leading 30-29 at halftime, the Stampede held Selma to just 19 points in the second half. Jones’ said Paul Bryant put an emphasis on slowing down Selma’s Jamya Smith, who could not find the range Thursday night and made only one three-pointer.

Smith’s three-pointer did come at a big moment though. With the Saints down 39-32 in the third quarter, Smith hit a three-pointer at the 3:24 mark to get Selma within four points. Paul Bryant still managed to extend its lead to 46-39 before the end of the quarter.

The fourth quarter was all Stampede, as Paul Bryant held Selma to only nine points in the final eight minutes.