An official date has been set for a gun buyback in Selma. 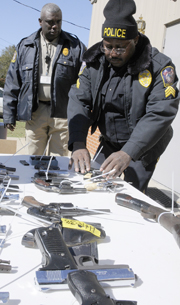 Selma City Councilman Michael Johnson announced during the council’s Tuesday meeting the buyback would be from 10 a.m. to 2 p.m. on April 19 at Macedonia Apostolic Church on Clinton Avenue. The buyback would dole out money for guns with no questions asked.

Guns purchased in the buyback would then be destroyed, according to Macedonia Apostolic Church pastor Robert Pettus.

“This is our way of trying to help curb all the senseless murder and killings,” Pettus said in January. “We want to get as many guns off of the streets as we can. We are saying swap and save a life; it’s a way of saying no more.”

This is the third year Pettus has hosted a gun buyback event. In its first year, the event collected 57 guns. Collections dropped slightly, to 37 guns collected, in the second year due to a shortage of funding.

In January, Johnson asked fellow council members to donate a portion of their discretionary funds to help pay for weapons at the gun buyback. The event has now raised about $1,400, but Johnson said more funding is needed to purchase as many weapons as possible.

In previous years, the program doled out $100 per weapon. Johnson said he is unsure if this year’s event will pay out an identical fee.