State Board unanimously votes to take over Selma City Schools 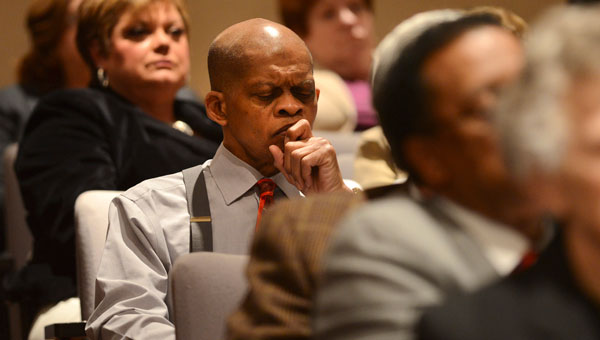 Selma Superintendent of Education Gerald Shirley, center, furrows his brow upon hearing the State Department of Education will be taking over the Selma City School System. The unanimous vote came during Wednesday’s state board meeting in Montgomery. (Jay Sowers | Times-Journal)

MONTGOMERY — Nearly a year after the Selma City School Board president called for a full investigation of the system because of alleged misconduct, the State Board of Education voted Wednesday to take over the system, effective immediately.

The unanimous vote didn’t require any discussion. State school board members were quick to vote in favor of state superintendent Dr. Tommy Bice’s resolution for state intervention seconds after it was proposed.

Bice said the takeover is based partly on a deficient corrective action plan, required by a scathing state investigation.

“I’m a pretty collaborative, working sort of fellow, but don’t get between me and what’s right for a child,” Bice said after the meeting. “There is no patience for individuals in that school system that are not doing what’s right for children.”

The resolution sets an estimated completion of two academic years for state intervention, depending on the city school board’s cooperation, Bice said. The takeover requires the board to fix any problems found in the original investigation, implement measures to track improvement, compliance with oversight by the state and willingness to proactively respond to evidence of deficiencies within the Selma City School System.

Bice said he is currently assembling a team of individuals and one, specific, point person to oversee the takeover. He expects the team to begin advising Selma school officials in two weeks.

The Alabama State Department of Education has the authority to handle the day-to-day decision making during a takeover, according to Bice, but he prefers the team work with the current superintendent to improve the system.

Bice used two examples of how a takeover could work. A positive example is the Midfield City School District in Midfield, where the board worked well with the state department of education, graduation rates increased and the takeover ended in one year, according to Bice.

In the Birmingham City School System, Bice said state intervention took 18 months because the board didn’t work well with the state department. Though, the end result was still positive, he said. 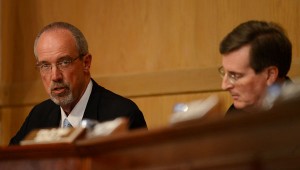 Alabama Superintendent of Education Dr. Tommy Bice, left, makes a recommendation to the State Board of Education Wednesday. During Wednesday’s meeting, the board voted unanimously to intervene — or takeover — the Selma City School System “beginning immediately.” (Jay Sowers | Times-Journal)

“It’s really up to the Selma board as to how they want this to work,” Bice said. “Our main thing is there are children that need to be served and they are currently not being served the way we expect them to be. We’ll work with them on making decisions or we’ll make them on their behalf if we need to.”

No members of the Selma City School Board attended Wednesday’s state meeting. But, Selma Superintendent of Education Gerald Shirley was in the audience and listened to the decision. He declined to comment afterward.

State School Board member Ella Bell, who represents District 5 on the board, the area that includes Selma, said Bice and the state board hoped Selma school officials would speak during Wednesday’s meeting.

“We offered Selma City the opportunity to come today and explain to us why they were incompliant and how we could avoid intervention at this time and if you were here for the entire meeting, you understand that nobody came from Selma City,” Bell said.

Though Wednesday’s vote was the final decision on the takeover, the process leading to the takeover began nearly one year ago, when former Selma High teacher Latangila Williams was arrested on multiple charges, including inappropriate sexual conduct with a student. Williams pled not guilty to the charges and is awaiting trial. She is currently on unpaid administrative leave.

Next came an investigation of the city system by the Alabama State Department of Education after the Selma City School Board voted against an independent investigation.

The state investigation, released in fall 2013, said the Selma City School System failed to adequately investigate allegations of inappropriate sexual behavior, failed to enforce policies regarding graduation requirements and standardized testing procedures and had a general disregard for instructional time.

The takeover process officially began on Jan. 18, when the state board unanimously approved a resolution during a special-called meeting, notifying the school system of its intent to intervene. The resolution set Feb. 12 as the final date for the Selma City School Board make its case. 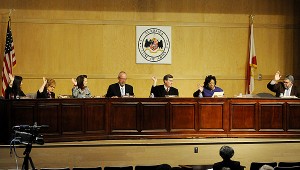 The State Department of Education unanimously supported the resolution to take over the Selma City School System. (Jay Sowers | Times-Journal)

Bice gave the Selma School System an opportunity to provide additional information after the special-called meeting, but he said the results weren’t realistic.

“The report that they submitted, in my opinion, is a very good, solid report for the second phase of this work,” Bice said. “What was missing in that report was what do we do to address the immediate issues that we have identified. What was missing is what are we going to do about the people who are doing the wrong things right now.”

Selma resident Renald Wells, who has three children in the Selma City School System, attended the meeting and said afterward he is optimistic about the intervention and believes children will benefit from the takeover.

“Overall, I have seen a decline in the quality of education from the time I was in the Selma City School System,” Wells said. “I have a general concern about teachers following through on making sure that the students are receiving the proper education. I think the state has the children at heart and will do its best to make sure they are receiving an adequate education.”

Bice assumed his current position on Jan. 1, 2012. Since taking office, the State Board of Education has intervened in four different school systems in the state.

Students and teachers file through the front doors of Byrd Elementary School in Selma Monday afternoon. The Alabama State Board... read more