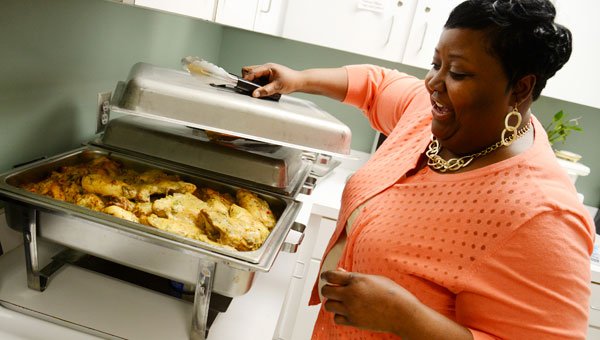 When one thinks of their local library, the first things to mind are surely books, movies, computers and … well, probably more books. But this week, the Selma-Dallas County Public Library is assuming the role of a world-class restaurant mixed with a first-rate cultural center, as it hosts the Sensational Selma Cooks African American three-day cooking showcase.

Walker, who presented to a full room Tuesday and prepared a meal of baked chick supreme, rice pilaf, green beans, yeast rolls and peach cobbler, said the chance to speak to the public about her recipes and her catering service was something she could not pass up.

“I was very excited to take part in this event, and it was a big honor for me to be asked to be here today,” Walker said. “I wanted to show people that a lot of the ingredients I use are things you can find at almost any store, and that it’s all about how you prepare your meal.”

With stories about the lessons learned from Walker’s mother, as well as others learned while cooking at various restaurants in Selma, library director Becky Nichols said she was a perfect fit for the event.

“The whole event is about fellowship, and nothing brings people together more than food,” Nichols said. “This is just one of the ways we are celebrating the African American community this month.”

Librarian Jan Parker said the public had expressed great interest in the cultural cooking event, as most of the tickets were sold in advance of the presentations.

“So far, we’ve have maybe five tickets left for each event at the most,” Parker said. “I hope we can do this every February to celebrate African American culture. It’s no surprise this event has been a big hit as all of these cooks come very highly recommended and when we called each of them to ask if they’d participate.”

Along with the cooking shows, the library has several pieces of African American art on display throughout the building and special programs and displays in the children’s department.

For information on tickets to the Sensational Selma cooking classes for Wednesday and Thursday, which begin at noon both days, please call the library at 874-1725. Tickets are $8 each.