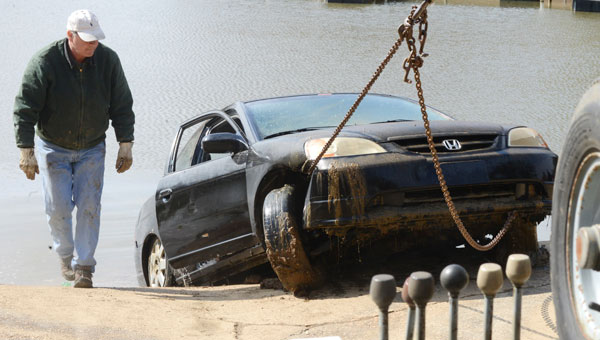 Tow truck operator Buster Zuelke walks toward his truck Monday morning while pulling a Honda Civic from the basin at the Selma Marina. (Jay Sowers | Times-Journal)

A woman is lucky to be alive after accidentally driving her car off in to the Selma Marina Monday.

Selma Police Officer Matthew Smyly said the woman, who declined comment and would not be identified, had parked her car on a section of sloped concrete near the water’s edge Monday, and was still inside the vehicle when it slipped in to gear.

“She was down here doing some paperwork, and got ready to leave and she popped the clutch and it just started jerking and then slipped itself in to neutral and slid in to the water,” Smyly said.

The car, a dark 2002 Honda Civic, slid in to the water sideways, trapping the woman for a moment, Smyly said.

“It’s so muddy down there and it just started sliding in sideways,” Smyly said. “But thankfully, she was able to break the passenger window and get to the shore.”

According to witnesses, one passerby saw the car go underwater and was able to pull the victim to the shore using a large stick.

Gordon McLendon, owner of the nearby Sandbar restaurant, was working at the time of the incident and while he didn’t see the moment when the car went underwater, he said it was still a harrowing morning at the marina.

“I noticed the car down there at one point, and a minute later it was gone. One of our customers called 911, the police came, and at that time you could still only see the roof of the vehicle,” McLendon said. “This is the first I’ve seen something like this since we opened up here about 13 months ago.”

Will Dailey, with the Dallas County Rescue Squad, who put on a wetsuit and scuba gear and attached a tow truck’s hook to the front bumper, said the murky and muddy conditions of the water made his job more difficult.

“You can see maybe a foot in front of you,” Dailey said. “There’s just a lot of mud. It was sitting down there in the mud, sitting sideways. It was tough to find a place to hook on to it.”

Daily said the calm waters of the marina’s basin were considerably easier to dive in compared to the fast-moving waters of the nearby Alabama River.

“If this had been off the river, it would have been a mess,” Dailey said. “The current of the water flow would make it hard for me to move around because it would push and turn me around. It could have been a lot more dangerous.”

The victim was not injured during the incident and looked on as her car was pulled from the water.