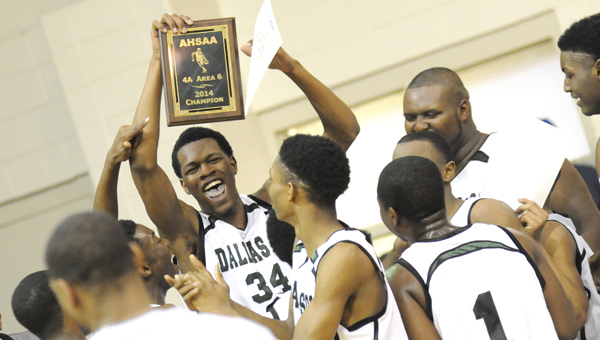 Dallas County’s William Lee holds up the Class 4A, Area 6 championship plaque the Hornets were awarded after their win over Tallassee Monday night. The Hornets blew out the Tigers 73-30 and will take on Beauregard High School Friday in a sub-regional game.–Josh Bergeron

PLANTERSVILLE — No. 1 Dallas County could have shut down its offense after two quarters and still had enough points to defeat the Tallassee Tigers Friday in the Class 4A, Area 6 championship game.

The Hornets pummeled the Tigers, 73-30, and scored 43 points in the first half. With the win, the Hornets secured the area title and will host Beauregard High School Friday in a sub-regional game.

Dallas County was firing on all cylinders from the opening tip. After missing the first shot of the game, the Hornets went on a 17-point run before the Tigers could score.

Though his team put on an impressive performance, Dallas County coach Willie Moore said his team still has some work to do to prepare for later playoff rounds.

“You know I wish we could have scored in the paint more than we did in first half, but we were shooting the ball really well,” Moore said about his teams performance. “I was pretty pleased with our effort, but I understand that we have to get better.”

Saying Moore’s team shot the ball well might be a bit of an understatement. His team only missed four shots in the first quarter and set a blistering pace making nearly every shot attempted from behind the arc in the first half, due mostly in part to Jerrod Moorer who scored 26 points in the game — 18 of Moorer’s total points came on three-point shots.

William Lee was named the tournament’s most valuable player and also played well for the Hornets, with 15 points, 6 blocks, 5 assists, 3 steals and 9 rebounds. Lee had three turnovers in the game.

Tallassee’s coach Will Glaze said his team was outmatched, but also didn’t play up to its standards.

“We played hard, but we didn’t play well at all,” Glaze said. “Part of us not playing well though is attributed to them. Dallas County came out and played a great game.”

It was clear Tallassee was outmatched less than four minutes into the game, when Glaze called a timeout after Dallas County scored 17-straight points.

Tallassee scored its first basket soon after, but didn’t score again until nearly the end of the first quarter. The Tigers scored again midway through the second, but could not claw their way back into the game. Dallas County even outscored Tallassee in the fourth quarter, after both teams put in their backups.

Though Tallassee lost big, their season isn’t over yet. The Tigers will play at Dadeville High School Friday.