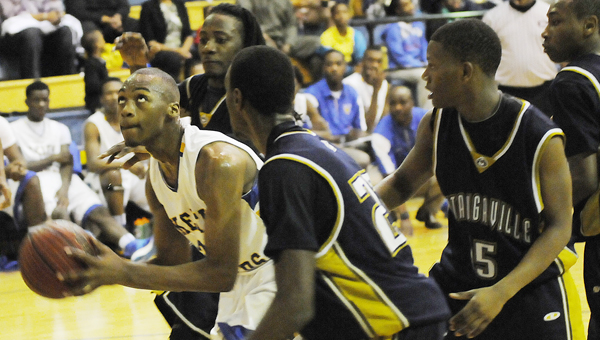 Keith’s Dalven Johnson looks up towards the basket while players from Autaugaville surround him. Johnson scored nine points for the Bears in the contest as they blew out the Eagles to win the Class 1A, Area 5 championship game. Keith will take on Holy Spirit Friday night.–Daniel Evans

Jaequan scored 14 of his 20 points in the second quarter and Anfernee added 10 of his own to help Keith break a close game wide open. Anfernee scored 18 points in the game.

“Jaequan had the hot hand early and we rode him until we couldn’t ride him anymore,” Keith head coach Tommy Tisdale said. “I think Anfernee may have started it but Jaequan picked up and in the first half they were shooting the ball extremely well together.”

The game started out as a physical contest, with the Eagles leading 11-10, but the Bears answered with an 11-0 run behind an Anfernee Simmons three-pointer and a Jaequan Simmons acrobatic layup. The Bears didn’t trail again.

Jaequan kept the momentum going after making three free throw attempts after being fouled on a three-point attempt. On the Bears’ next possession, he went a more conventional route, hitting a three-pointer to give the Bears a 27-14 advantage.

Tisdale was proud of his team’s performance because early on the Bears’ starters got into foul trouble. Four reserves were on the floor early in the first quarter but they set the tempo and helped Keith take a commanding lead into halftime.

“That probably was the true definition of a total team win,” Tisdale said. “That particular game, that style of game is the one I have been waiting on the entire season.”

The Bears used their aggressive style to their advantage in the first half and were awarded with 25 free throw attempts.

In the third quarter, Autaugaville head coach Darren Golson finally had enough. He got upset with a non-call and was called for a technical foul, but even that couldn’t fire his team up enough to get them back into the game.

“I guess we weren’t physical enough. We didn’t do the things we were supposed to do,” Golson said.

The Eagles actually cut the lead down to fifteen in the third quarter, but the Bears answered with a 10-2 run to close the quarter. As time ran out in the third Jaequan hit a three to give the Bears a 62-39 lead.

The fourth quarter was a lot of the same, as Keith held on to its big lead and at one point upped its advantage to 25 points.

The Keith Lady Bears are used to big performances from sophomore Harriet Winchester, but her performance Monday night was even unbelievable by her standards.

Winchester scored 36 points, including 31 in the first half to help the Lady Bears defeat Autaugaville 68-38 and capture the Class 1A, Area 5 championship.

Winchester scored 20 of the Bears 23 points in the first quarter, including four three-pointers.

“I should have had somebody on her the whole night and shut her down,” Autaugaville head coach Debra Dorsey said about Winchester’s perforamnce. “She played a good game.”

Winchester nailed two big three-pointers before halftime and the Bears took a 41-23 lead going into the locker room. In the second half she cooled down some, but the rest of her teammates helped her out.

The Bears outscored the Eagles 15-3 in the third quarter, allowing Keith to stretch its lead to 56-26.

The final quarter gave each team a chance to play some of their bench players.

“It’s tournament time and everybody is adding in their part,” Williams said. “We played team defense well and on offense we moved pretty well.”

The Lady Bears will host Berry Thursday night in a sub-regional contest.