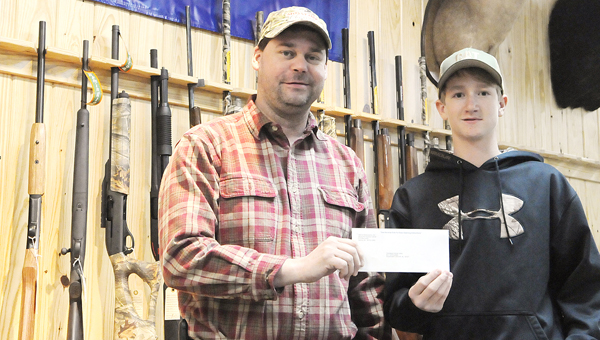 Gage King, right, shows off his prize money after winning both the adult and teen categories of the annual Big Buck Contest. Also pictured is Rountree Outdoors’ owner Chet Chappelle.

Anyone needing a little hunting advice may want to call Pleasant Grove’s Gage King, who continues to one-up adults and youth in the annual Big Buck Contest sponsored by Rountree Outdoors and The Selma Times-Journal.

King, 14, pulled off a sweep in this year’s Big Buck Contest, winning both the youth and adult competitions, a first for the contest. King paid for entry into both contests — thanks to a small loan from his grandfather — and then made it worthwhile by killing a nine-point buck that scored 144.75 to win both contests.

“On the Cahaba River, [the deer] was walking a ridge line checking for does and it walked into the wrong spot,” King said.

“He did his homework,” Chapelle said. “It surprised me too. What happened was they had some pictures of the deer early in the season and he basically knew that the deer was in the area and my hat goes off to him.”

King was presented with his winnings Saturday at Rountree Outdoors.

For winning, King banked $1,000 for the adult competition plus $500 for winning the youth competition. He also won a tree stand from Rountree Outdoors and a head mount from Mim’s Taxidermy.

So, how will King spend his winnings? Thus far, he hasn’t made any plans.

“I may buy some stuff for fishing and hunting,” King said.

Out of the six total competitions and in the three years of the contest— youth and adult — King has won 50 percent of them.

“After I won it then [in 2011], I asked to see if I could enter both,” King said. “[This year] we watched the deer I killed on camera during bow season and I knew that was the deer I wanted to kill so I signed up.”

Chapelle said right now, he’s the guy setting the standard on how to win the competition.

Sabra Sanctuary was also awarded $660 from the contest. Sabra Sanctuary is a non-profit organization serving clients of domestic violence and sexual assault in Dallas, Perry and Wilcox counties.