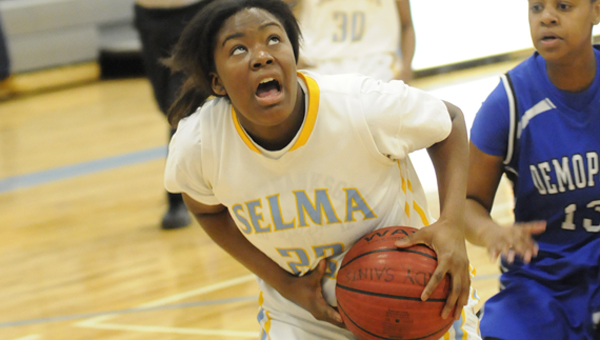 Selma’s Takeesha Wilson looks at the basket and prepares to go up for a shot, while a defender from Demopolis looks on. Wilson scored 10 points to lead the Saints in the game.–Daniel Evans

Although the Selma Lady Saints (24-4) led throughout the Class 5A, Area 6 championship game Saturday night, they had to claw out a hard fought 38-35 win over Demopolis.

With their lead down to only three points in the closing minute, the Saints used their rebounding advantage to hang on for a win.

“The whole year I’ve been proud of them,” Selma head coach Anthony Harris said. “This is a special team. On any given night, somebody is going to show up and play well for us.”

The eighth-ranked Saints were fouled numerous times in the closing minute, but only two free throws went in. In the end, it didn’t matter because Selma came down with rebound after rebound in the last few seconds, preventing Demopolis from getting the ball back.

The Tigers seemed to be down by three to nine points the entire night. When it looked like Demopolis was about to tie the game or take the lead, turnovers or bad decisions prevented it from happening.

“Turnovers were a big part of it,” Demopolis head coach Tony Pittman said. “We didn’t take care of the basketball tonight and Selma probably had a lot to do with it. We had a lot of unforced turnovers.”

The Tigers simply refused to go away, even after Selma took a 35-25 lead with less than four minutes to play in the fourth quarter. Demopolis attacked the basket and was awarded with six free throw attempts that aided the Tigers in getting back in the game.

However, just like the rest of the contest, Demopolis was unable to tie the game up.

Sylvia Clayton made two free throws to get the Tigers to within 36-31 with 1:21 left and on the ensuing inbounds Deedee White stole the ball and made a layup to make it a three-point game.

“Sometimes the ole’ panic button will set in,” Harris said about his team’s trouble with closing the game out.. “Sometimes when you have a big lead and of a sudden it starts going down you have a tendency to sit around and see what is going to happen.”

Selma actually turned the ball over on the Saints next possession, but Demopolis gave it right back in an effort to quickly race the ball back down the floor.

From that point on, Selma won the game by dominating the rebounds.

Jacquetta Dailey was fouled and made one free throw with 39.8 seconds left, but Areyanna Williams came down with the rebound of Dailey’s second shot and was fouled. Williams missed both of her free throw attempts, but the rebound went off the foot of a Tigers’ player, giving Selma possession again.

After being inbounded the ball, Selma’s Takeesha Wilson was fouled and she missed the front end of the one and one, but came down with her own rebound and was fouled again with 10.4 seconds left. This time Wilson made one of two to give Selma a five-point lead. Demopolis added a layup at the buzzer, but it was too little, too late.

“It seemed like once we made a run we had a turnover or wouldn’t finish a shot,” Pittman said. “We left a lot of shots on the backboard tonight that we didn’t finish. If we are going to be able to beat a team the caliber of Selma, we have got to be able to finish those shots.”

The Saints can look forward to one more home game after the win. Selma will host Paul Bryant in a sub-regional game Thursday.

“We take them as they come and we are glad to be back at home,” Harris said. “I told them we have two choices, we can stay here or we can hit the road and on that road it isn’t nice. They delivered this year.”

Simmons, Bears soar past the Eagles into area championship

Keith’s John Pettway races the ball up the floor in the Bears’ blowout win over Ellwood Christian Friday night. With... read more