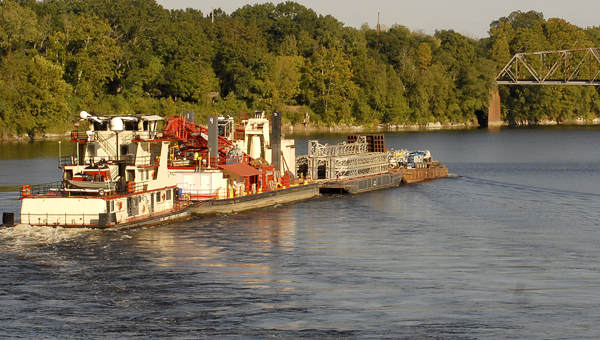 An annual river survey of the Alabama River by the United States Army Corps of Engineer took a little longer than normal last fall, but officials with the Corps said it was worth the wait.

The survey, which began in September was halted by the shutdown of the federal government in October and was concluded in November, said Danny Hensley, Project Manager with the Corps’ Alabama River Lakes Mobile District during Friday’s meeting of the Coosa-Alabama River Improvement Association, Inc. in Montgomery.

“We were able to do a complete survey of the river, bank to bank, from the Claiborne lock and dam down to the confluence with the Tombigbee River,” Hensley said.

The annual scan involves a Corp boat traveling down the river and using sophisticated underwater mapping systems to locate areas where underwater sandbars or shoals could impact the ability for commercial or recreational boat traffic.

Hensley said the scan performed last fall revealed 18 underwater shoals that encroached from the edges of the river.

“Most of those areas, the shoaling is only encroaching a couple of feet,” Hensley said.

He said the shoals could be attributed to high water levels that have lead to increased runoff of silt and dirt along the river.

While the annual survey of the final stretch of the Alabama River is required annually, Hensley said the Corps has the capability and the duty to perform similar scans on less travelled rivers in the state, including the Alabama River as it passes through Dallas County, if a problem were to arise there.

“We can, and do, go over and survey the waterways in Selma and Dallas County if a problem arises,” Hensley said. “We just do the surveys up there on an as-needed basis at this point.”

Even though surveys of the Alabama River are less frequent in Dallas County, Hensley said the Corps still has a large presence within the county.

“We do have an active recreations program in the Selma area, and I know that we had recently done some bank stabilization work at Steele’s Landing,” Hensley said.

Wynne Fuller, Chief of the Corps’ Operations Division out of Mobile, said the small amount of boat traffic on the river as it passes through Selma and Dallas County is a large reason the annual underwater scans are not necessary.

“We are a low-use waterway, so we are not funded to perform routine maintenance and surveys up there,” Fuller said.

Fuller said the Corps is required to perform similar annual surveys and tests on any ongoing projects every year.