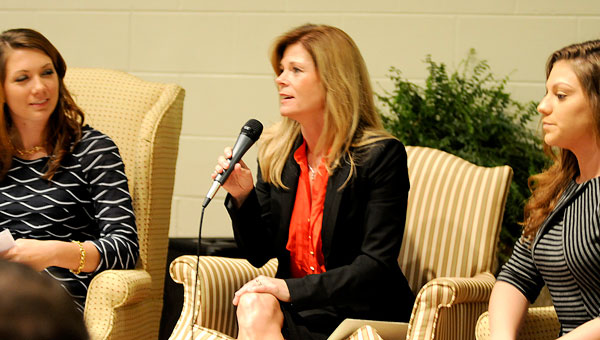 Dallas County resident Whitney Denson shed tears as she told her story about considering abortion to a room full of guests Thursday evening at the Selma-Dallas County Sav-A-Life fundraising banquet.

Denson said she felt helpless and scared when she learned at 16-years-old that her boyfriend, who she witnessed commit suicide, had impregnated her. Denson shared her personal stories about how she became a client of Selma-Dallas County Sav-A-Life, a ministry that supports young women with crisis pregnancy, at the organization’s fundraising banquet Thursday.

“I was honestly scared that I would make an impulsive decision and go through with it,” Denson said.

Denson visited the Sav-A-Life clinic with the intention to confirm her pregnancy, but left with information that made her decision much easier to make.

According to Selma-Dallas County Save-A-Life, the agency conducted 189 pregnancy tests, saved 12 babies, had 84 parenting class visits, held 149 abstinence education classes and brought about 87 salvations. Proceeds from the banquet will be used to help them continue their work.

Shelby Moore, who also shared her story during Thursday’s banquet, revealed her pregnancy to her family, just hours before her daughter was born.

She said she went Sav-A-Life after the birth of her child to received emotional support.

Moore said her talks with program director Jennifer Dobbs helped her deal with her issues.

“She really helped me sort through the shock,” Moore said. “One day you are Shelby Moore, and the next day you’re a mother.”