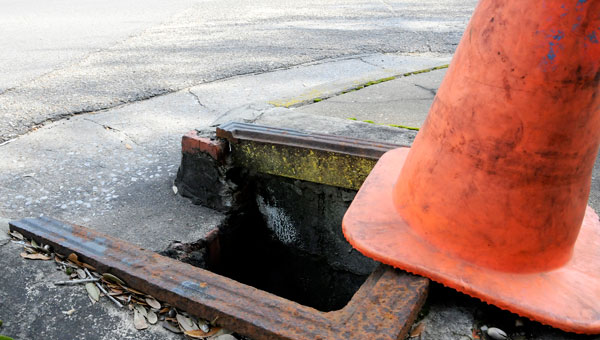 Sewer drain covers are begging to pop up missing across Selma, with the Old Town neighborhood being hit hardest. Ward 3 Councilman Greg Bjelke said he suspects the thieves are selling the scrap metal for money. (Josh Bergeron | Times-Journal)

Across Selma, iron is beginning to disappear.

Selma Public Words director Tommy Smith said as many as 40 sewer drain covers have gone missing in recent weeks. Smith said the covers are likely stolen late at night or early in the morning.

“I just don’t understand why someone would do it,” he said. “By taking the manhole cover, they are leaving the citizens in danger. If someone was walking down the street at night, they might not see that the cover is missing and would fall right in the hole and hurt themselves.”

Smith said he first learned of the thefts about a month ago when citizens reported the sewer drain covers missing.

“Normally we would never have to replace a cover,” he said. “Once you put them in, that’s it, unless it breaks. I have probably replaced one or two in 15 years, other than the ones that were stolen.”

But in the past few weeks, city employees have installed 20 new sewer drain covers throughout the city at $62 a piece, according to Smith.

After stealing the covers, thieves are likely selling the scrap metal for a few bucks, according to Selma City Councilman Greg Bjelke.

City officials have notified nearby recycling businesses not to accept the covers, but Smith said thieves may break up the covers and mix pieces in with other scrap metal material.

“You can’t just take the whole top to the recycling place because it says city of Selma on top,” Smith said.

This isn’t the only time thieves have targeted sewer drain covers. Bjelke said several years ago a similar incident occurred and the stolen tops were replaced with concrete.

“Concrete tops keep people from falling into them, but I honestly like the look of the old iron covers better,” Bjelke said. “It’s a shame that we have these thieves. Every time I see another one missing I just get frustrated.”

The historic Old Town neighborhood may have been hit the hardest, but Bjelke said the thefts are occurring all over Selma.

The sewer drain thefts could be the work of a lone thief, as the covers weigh 25 to 30 pounds, Smith said.

Selma Chief of Police William Riley said the police department is following any leads on the thefts that may come up to find the culprit.

To prevent further thefts, the public works department is welding the newly installed drain covers on each of the four corners. The weld prevents thieves from removing the covers without proper tools. Public Works employees are still able to remove the covers if needed, Smith said.

“Doing that make it difficult and more time-consuming for us,” he said. “At least we are keeping the thieves from stealing them.”

A customer looks through beads at one of the vendors during the 2013 Bridge Crossing Jubilee. Dozens of vendors line... read more